Reactions to the EAT-Lancet Commission

Last week’s EAT-Lancet Commission on healthy diets from sustainable food systems has received mixed coverage and reactions, some of which we outline here.

The EAT-Lancet report was covered widely in the mainstream media, including:

Some livestock industry voices have been critical of the report.

For instance, the UK’s Agriculture and Horticulture Development Board (AHDB) responded “Farming, in particular dairy and red meat, is part of the solution, making best use of naturally occurring assets to feed a growing population. They are an important nutritional part of a healthy, balanced diet.” The AHDB also noted that alternative proteins are often highly processed and may require imported ingredients, which (it says) might be produced to lower environmental standards.

The AHDB also said “Despite the modelling presented by the EAT Lancet Commission, no study has specifically assessed the environmental impact of diets based solely – or largely – on plant-based protein, as opposed to a mixed diet containing animal protein… In addition, grazing cattle and sheep manage permanent pasture as an effective carbon sink and make use of massive swathes of agricultural land that cannot be used for growing other foods.” For studies on the environmental impacts of different diets including plant-based diet, see Dietary greenhouse gas emissions of meat-eaters, fish-eaters, vegetarians and vegans in the UK, Evaluating the environmental consequences of Swedish food consumption and dietary choices and Environmental impact of omnivorous, ovo-lacto-vegetarian, and vegan diet. For discussion of carbon sequestration through grazing, see the FCRN report Grazed and Confused? For discussion of the ‘livestock from leftovers’ approach that makes use of waste streams and non-arable farmland, see Hannah Van Zanten’s blog A role for livestock in a sustainable food system.

Similarly, the British Meat Processors Association voiced concern, suggesting that the report does not give enough weight to the role of meat in providing nutrients to the global population, and adding “On a more cynical note, the campaign could open the door for new (and old) players in food and agriculture to capitalise on a lucrative new market, and for Governments to eye new tax opportunities in an attempt to curb meat eating.”

For those who think EAT-Lancet report is a conspiracy against meat, please note this and read the actual report. Issues we raise are: 1. How much? 2. How produced (grain-fed?); 3. ecosystems damage from global meat output; 4. Health gain of less meat + doubled fruit&veg; 5. CO2e. https://t.co/we92XkjMmD

Dan Crossley of the Food Ethics Council posted a video reaction to the EAT-Lancet Commission, in which he welcomes most of the findings and warns against oversimplifying the debate between vegan and meat-eating diets.

A short vlog from me on the meat debate, hot on the heels of the newly published Eat Lancet Commission report... https://t.co/2QgZ5iMg8q pic.twitter.com/O0TT23ewSX

We applaud the #EATLancet report for addressing the impact our diet has on the planet and calling for a shift away from animal protein. The problem? No one is going to follow this advice.

The solution? We make the default choice a better one! https://t.co/Zeaxy3Dvqh

See the Foodsource chapter What is a healthy sustainable eating pattern? 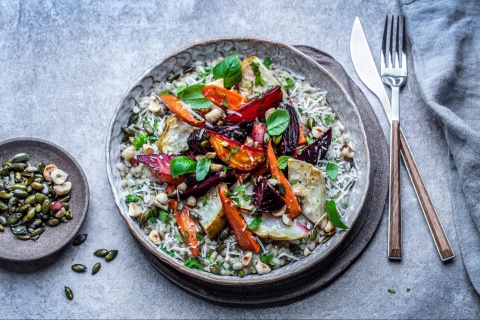