Dietary greenhouse gas emissions of meat-eaters, fish-eaters, vegetarians and vegans in the UK

This study is one of the very few that examines the GHG impacts of a selection of real life ‘self selected’ diets as opposed to those that are modelled or hypothetical.  It looks specifically at the dietary patterns (based on a standard 2,000 kcal diet) of UK vegetarians, semi-vegetarians and non-vegetarians.  Approximately 55,500 subjects were chosen for the study, all part of the EPIC-Oxford cohort study.

The paper quantifies the GHGs associated with the three diets and concludes that, after adjusting for age and sex, dietary GHG emissions in self-selected meat-eaters are approximately 2.5 times higher than those in vegans.  As the quantity of animal-based products in the diet decreased, significant trends towards lower saturated fat, higher fibre and higher fruit and vegetable intake (but a higher intake of sugars) were noted. This study emphasises the need for policy to act on the basis of these findings: “national governments that are considering an update of dietary recommendations in order to define a ‘healthy, sustainable diet’ must incorporate the recommendation to lower the consumption of animal-based products”.

The study notes two other studies, both of them French, that have looked at GHGs from self selected diets. A summary of one of them, by Vieux et al. 2013 can be found on the FCRN website here; the other is by Masset et al. 2014 and the abstract is here. Vieux et al. (2013) showed that those who consumed a healthy diet, defined by low energy density, high nutrient density and low consumption of saturated fat, sugar and sodium, had higher dietary GHG emissions than those who consumed an unhealthy diet. However consumption of ruminant meat and pork, poultry and eggs was similar in both healthy and unhealthy diet groups. Masset et al. (2014) showed that diets with lower than average GHG emissions tended to be less healthy, defined using a nutrient density index. These low GHG diets consisted of approximately 20 % less meat, fish and eggs than the average diet. They also identified a subset of the population who consumed a healthy and low GHG emissions diet which did not cost more than an average diet and which was characterised by a higher content of plant-based dietary GHG emissions between diet groups.

The production of animal-based foods is associated with higher greenhouse gas (GHG) emissions than plant-based foods. The objective of this study was to estimate the difference in dietary GHG emissions between self-selected meat-eaters, fish-eaters, vegetarians and vegans in the UK. Subjects were participants in the EPIC-Oxford cohort study. The diets of 2,041 vegans, 15,751 vegetarians, 8,123 fish-eaters and 29,589 meat-eaters aged 20–79 were assessed using a validated food frequency questionnaire. Comparable GHG emissions parameters were developed for the underlying food codes using a dataset of GHG emissions for 94 food commodities in the UK, with a weighting for the global warming potential of each component gas. The average GHG emissions associated with a standard 2,000 kcal diet were estimated for all subjects. ANOVA was used to estimate average dietary GHG emissions by diet group adjusted for sex and age. The age-and-sex-adjusted mean (95 % confidence interval) GHG emissions in kilograms of carbon dioxide equivalents per day (kgCO2e/day) were 7.19 (7.16, 7.22) for high meat-eaters ( > = 100 g/d), 5.63 (5.61, 5.65) for medium meat-eaters (50-99 g/d), 4.67 (4.65, 4.70) for low meat-eaters ( < 50 g/d), 3.91 (3.88, 3.94) for fish-eaters, 3.81 (3.79, 3.83) for vegetarians and 2.89 (2.83, 2.94) for vegans. In conclusion, dietary GHG emissions in self-selected meat-eaters are approximately twice as high as those in vegans. It is likely that reductions in meat consumption would lead to reductions in dietary GHG emissions.

The study is available open access, read it in full here and see further coverage of this paper here.

For our discussion paper: What is a sustainable healthy diet? see here.

For our report Changing what we eat: a call for research & action on widespread adoption of sustainable healthy eating see here.

And for our discussion paper Changing consumption: how can we change the way we eat? see here. 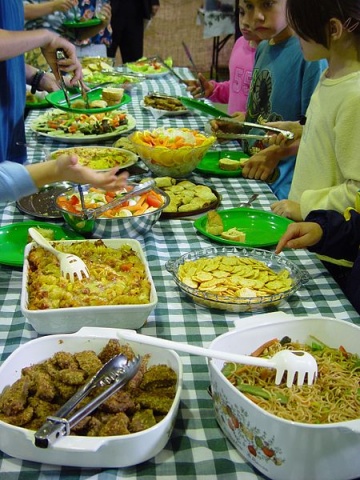