This twentieth edition of the Agricultural Outlook, and the tenth prepared jointly between OECD and the UN Food and Agriculture Organization (FAO), provides market projections to 2023 for major agricultural commodities, biofuels and fish across 41 countries and 12 regions: OECD member countries (European Union as a region), key non-OECD agricultural producers (such as India, China, Brazil, Russian Federation and Argentina) and groups of smaller non-OECD economies in a more aggregated form. This edition includes a special focus on India.

It makes global projections, and states that worldwide poultry production will surge ahead in the next nine years, accounting for 28.3 million tonnes (mt) of the additional 57.7mt annual meat production projected from 2011-13 to 2023. The report stressed poultry’s advantages regarding output growth: smaller land requirements, enabling production to be located near population centres, and a shorter production cycle, which "enables a quicker response from producers in adapting to profitability conditions".

Highlights from the report are summarized in the image below:

The international prices of major crops have dropped significantly from their historical highs, largely in response to bumper crops in 2013/14. In contrast, meat and dairy product prices are at historically high levels, primarily because their supply fell short of expectations in 2013. World ethanol and biodiesel prices continued their declines from the historical peak levels they had reached in 2011 in a context of ample supply for both.

You can read further coverage here.

Read more about agriculture projections here and see previous Agricultural Outlooks from OECD and FAO on our website here. 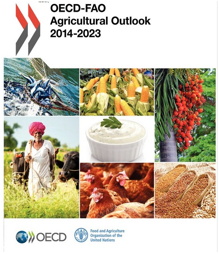