The jumbo carbon footprint of a shrimp: carbon losses from mangrove deforestation

This research calculates the carbon footprint of a meal to give a tangible example, aimed at the public in the US, about how daily food decisions can affect deforestation and greenhouse gas emissions (GHGe). The study uses a life-cycle assessment (LCA) approach that takes into account GHGe arising from the conversion of mangrove to cattle pastures and mangrove to shrimping ponds as well as from forests to pasture (cattle induced deforestation).

The researchers estimate that if a typical couple were both to order a “surf and turf” meal (comprising 4oz/100g shrimp and 160z/454g beef steak), and if both the shrimp and beef came from tropical sites where mangroves were converted to provide land for animal production, then each meal would generate 816kg CO2e. Essentially, the carbon footprint of the couple’s meal out is equivalent to the combustion of 695 litres of petrol – comparable to driving from Los Angeles to New York City, and back.

The researchers quantify the land-use carbon footprint by combining:

- The emissions arising from its conversion, and

- The quantity of the beef or shrimp produced over the life of the land use.

To determine the ecosystem carbon (C) stocks – i.e. the potential emissions – soil samples from intact mangrove forest and adjacent areas (that had been converted to cattle pastures or shrimp ponds) were taken to measure the actual C stocks. Optimistic levels of pasture and pond productivity (30 years of continuous use and nine years of continuous use, respectively) were assumed.

This paper underscores the importance of including land-cover change in LCA analyses. The authors conclude that by illustrating land-use carbon footprints with comprehensible examples, the public can understand how our individual decisions, on a daily basis, can affect land use and climate change.

These authors try to put into perspective food production problems that both governments and consumers need to address - pointing out that to do so, everyone needs access to information explaining the true total costs and impacts of food production (LUC emissions are only a part of the total costs).

While this paper says that mangroves are currently being destroyed at a rate of about 1% a year globally (and much higher at 2-8% in Southeast Asia) it does not discuss how these rates might change in the future.

Scientists have the difficult task of clearly conveying the ecological consequences of forest and wetland loss to the public. To address this challenge, we scaled the atmospheric carbon emissions arising from mangrove deforestation down to the level of an individual consumer. This type of quantification represents the “land-use carbon footprint”, or the amount of greenhouse gases (GHGs) generated when natural ecosystems are converted to produce commodities. On the basis of measurements of ecosystem carbon stocks from 30 relatively undisturbed mangrove forests and 21 adjacent shrimp ponds or cattle pastures, we determined that mangrove conversion results in GHG emissions ranging between 1067 and 3003 megagrams of carbon dioxide equivalent (CO2e) per hectare. There is a land-use carbon footprint of 1440 kg CO2e for every kilogram of beef and 1603 kg CO2e for every kilogram of shrimp produced on lands formerly occupied by mangroves. A typical steak and shrimp cocktail dinner would burden the atmosphere with 816 kg CO2e. This is approximately the same quantity of GHGs produced by driving a fuel-efficient automobile from Los Angeles to New York City. Failure to include deforestation in life-cycle assessments greatly underestimates the GHG emissions from food production.

You can read the full paper here (paywall).

You might also be interested in this research: Rates and Drivers of Mangrove Deforestation in Southeast Asia, 2000–2012 in which researchers at the National University of Singapore identify the major land use changes associated with mangrove deforestation in Southeast Asia. One of the co-authors of this also featured in a recent Inside Science (external link) program by BBC Radio 4, where he talks about carbon counting in mangroves.

You can also search for soil carbon sequestration or food labelling and traceability in our research library. 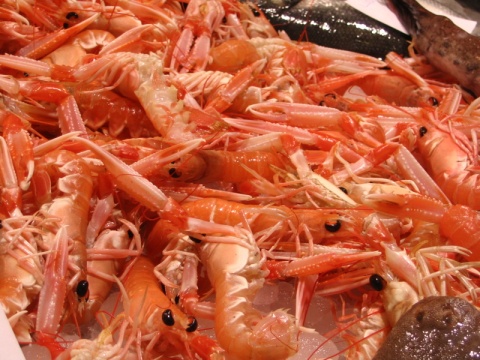