A growing imbalance between phosphorus and nitrogen fertilizer use in Africa could lead to crop yield reductions of nearly 30% by 2050, according to a new study from researchers at the International Institute for Applied Systems Analysis (IIASA).

Underuse of phosphorus-based fertilizers in Africa currently contributes to a growing yield gap—the difference between how much crops could produce in ideal circumstances compared to actual yields. This phosphorus-specific yield gap currently lies at around 10% for subsistence farmers, but will grow to 27% by 2050 if current trends continue. As farmers use fertilizers for their crops, nutrients such as nitrogen and phosphorus build up in the soil, providing a reserve of nutrients that plants need to grow. But fertilizer use remains very low in Africa, and to increase crop production, it is widely argued that farmers must increase their fertilizer use.  While nitrogen-based fertilizer usage has begun to increase in Africa in the last 10 years, the application of phosphorus to cropland has not kept pace, leading to a growing imbalance between nitrogen and phosphorus levels in soil. The new study shows that increases in nitrogen and phosphorus inputs must happen in a way that provides crops with the balanced nutrient input they need. In order to make optimal use of current nitrogen inputs, the researchers estimated that phosphorus applications would need to increase 2.3-fold. To close yield gaps nitrogen applications would have to increase 5-fold. Phosphorus applications would have to increase nearly 12-fold from 2.2 to 25.9 kg per hectare. But because of the cost of phosphorus, that remains a challenge. The global phosphorus cycle is, besides nitrogen, also increasingly growing out of balance with carbon, the subject of another recent paper by the same group of researchers.

The impact of soil nutrient depletion on crop production has been known for decades, but robust assessments of the impact of increasingly unbalanced nitrogen (N) and phosphorus (P) application rates on crop production are lacking. Here, we use crop response functions based on 741 FAO maize crop trials and EPIC crop modeling across Africa to examine maize yield deficits resulting from unbalanced N : P applications under low, medium, and high input scenarios, for past (1975), current, and future N : P mass ratios of respectively, 1 : 0.29, 1 : 0.15, and 1 : 0.05. At low N inputs (10 kg ha−1), current yield deficits amount to 10% but will increase up to 27% under the assumed future N : P ratio, while at medium N inputs (50 kg N ha−1), future yield losses could amount to over 40%. The EPIC crop model was then used to simulate maize yields across Africa. The model results showed relative median future yield reductions at low N inputs of 40%, and 50% at medium and high inputs, albeit with large spatial variability. Dominant low-quality soils such as Ferralsols, which are strongly adsorbing P, and Arenosols with a low nutrient retention capacity, are associated with a strong yield decline, although Arenosols show very variable crop yield losses at low inputs. Optimal N : P ratios, i.e. those where the lowest amount of applied P produces the highest yield (given N input) where calculated with EPIC to be as low as 1 : 0.5. Finally, we estimated the additional P required given current N inputs, and given N inputs that would allow Africa to close yield gaps (ca. 70%). At current N inputs, P consumption would have to increase 2.3-fold to be optimal, and to increase 11.7-fold to close yield gaps. The P demand to overcome these yield deficits would provide a significant additional pressure on current global extraction of P resources.

Read the full article here. A press release summarising the paper can be found here.

Read more about soil and fertilizer use here and here, agricultural yield projections and models here, land-use and ecosystems here and finally reports and studies on closing the yield gap here. 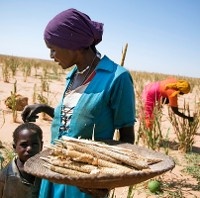