In a 2013 TED talk entitled ‘How to fight desertification and reverse climate change’ the Zimbabwean ecologist, Allan Savory, claimed that the ‘holistic management’ grazing management method that he has developed and promoted over 40 years, could stop global desertification and reduce atmospheric carbon dioxide to preindustrial levels, within a few decades.

The talk has been seen by 3.6 million viewers to date, and has resulted in considerable attention worldwide, especially within the grass-fed livestock industry. The theory underpinning this claim, put forth by Savory, is that holistically managed grazing systems leads to increases in grassland plant productivity in concert with the the soil’s ability to infiltrate and retain water. This increased pasture plant growth in turn leads to more carbon from the atmosphere being sequestered into the soil, while also stopping land degradation and improving profitability for herders, by allowing greater stocking rates.

These bold claims have drawn considerable criticism from researchers studying grasslands and agricultural systems, among others, on that basis that they are based primarily on anecdote and selective examples, and are not sufficiently supported by scientific evidence of a systematic or experimental nature. In response, Savory states that scientists, to date, have not made any effort to study anything he has written or said. In order to clarify the evidence base, this report, provides a timely and critical review of the the scientific support for the claimed effects of holistic grazing and management.

Holistic management can be described as a grazing management method based on planned rotational grazing that ’mimics nature’ with the aim of sequestering carbon and water in soils and thus increase pasture productivity. Holistic management at a meta-level is a framework for decision-making and a planning tool applied primarily to grazing systems. It is based on comprehensive goal-setting, focused on the kind of life pastoralists wish to have. Holistic management aims to use locally available resources to reach set goals by continuous monitoring and adjusting operations. Holistic grazing practised within holistic management is thus an adaptive and flexible grazing management approach. Hence it can take many forms, depending on what each individual herder wants to achieve, climate conditions and the availability of local resources. This, however, makes it hard to test experimentally, in a way that is generalisable across diverse grassland ecosystems.

In order to ‘mimic nature’ Holistic Management is founded upon a simple ecological theory that assumes that herbivorous animals can rehabilitate degraded land through grazing and that the world’s grasslands and wild herbivores evolved in parallel and thus are interdependent. Within this framework, grazing livestock substitute for the role of wild herbivorous animals provided that they are managed in a way that mimics ‘natural grazing’. Natural grazing within the HM framework, is characterized by large animal flocks moving across large areas as they try to escape predators. To simulate this function in holistic grazing, livestock are packed in large herds and frequently moved between different areas, resulting in a high intensity of grazing over short periods.

The report finds that of the 11 scientifically peer-reviewed studies that support the beneficial effects of Holistic Management, listed and approved on the Allan Savory’s, Savory Institute website, 5 are based on interviews or surveys, while only 6 make any quantitative assessment. Of these, results are partially inconclusive, and the reported effects are in most cases rather small. Significantly, it finds that to date, no review study has established that holistic grazing is superior to conventional or continuous grazing. However, neither has the reverse been demonstrated. It concludes, that holistic grazing could be an example of good grazing management, but nothing suggests that it is better than other well-managed grazing methods.

Of important relevance with ongoing discussions about the mitigation potential of grazing, the report finds that the mitigation claim made by Savory in the TED talk, seems to be based on an assumption that 2.5 tonnes of C can be sequestrated per ha, per year, on 5 million ha (corresponding to one third of the world’s land), continuously for almost 40 years. In comparison, the report finds that improved grazing management on grasslands can store on average approximately 0.35 tonnes of C per ha and year – a rate seven times lower than that used by Savory, to support the claim that holistic grazing can reverse climate change.

Allan Savory has since responded to the report’s findings on his blog here, which contains an e-mail sent to the authors, as well as his rebuttal of the report’s conclusions.  In it, he states he wants to promote an open discussion available for all to read and encourages constructive criticism “without which management and science cannot advance”.

As has previously been argued by Savory, on his blog, the authors denies that any existing research contradicts Holistic Planned Grazing’s efficacy.

“The papers you cite in coming to your conclusion as usual refer to a plethora of rotational and other grazing systems, that have nothing to do with Holistic Planned Grazing or Holistic Management”

“papers by Briske, Carter, Holocheck, Monbiot and others who keep citing one another and have never yet made any attempt to either understand or study Holistic Planned Grazing or Holistic Management”

The basis for this deflection of the report’s claims, as Savory argues, is that Holistic Planned Grazing (HPG) is distinct from the grazing system it advocates, which segments pastures and rotates livestock between segments periodically, according to observed characteristics of the pasture. Instead, it is an entire management framework and philosophy of which the grazing method is a part, which is deliberately a flexible, adaptive system, designed to handle the complexity of socio-ecological systems. Because of the high variability in the ecosystem states and climates of grasslands worldwide, and in the goals of land managers, Savory argues that standardisation, replication, and therefore experimental testing of HPG as whole (rather than just the grazing system associated with it) is not possible, and that therefore, it is incapable of study by experimental science.

Following this, he asks for HPG to be judged by the ‘results achieved’ (for example on his ranch in Zimbabwe) and also on the science that underpins the general precepts of the management framework. Specifically, he mentions the research of Andre Voisin in support of the idea that plants are overgrazed, not land, and that it is the exposure to grazing pressure of individual plants as a function of time, which is the essential variable to manage for, not stocking rates on pasture. He also goes on to highlight an example of research underpinning HPG, which challenges what he sees as the prevailing belief in ‘rangeland science’ that resting land, is beneficial for the ecosystems, especially with regard to ‘brittle environments’ with little rainfall.

Unfortunately, he does not explain how HPG can make causal knowledge claims with regards to combating desertification and climate mitigation, without recourse to science demonstrating such connections.

With regard to the carbon sequestration potential of HPG, he responds that he never quoted figures in his TED talk but rather, that he restates the general findings of others (see the extract below from the talk).

“people who understand far more about carbon than I do calculate that, for illustrative purposes, if we do what I am showing you here, we can take enough carbon out of the atmosphere and safely store it in the grassland soils for thousands of years, and if we just do that on about half the world's grasslands that I've shown you, we can take us back to pre-industrial levels, while feeding people”

In the blog he clarifies the basis for this further, as being from a 2012 paper in the Proceedings of the National Academy of Sciences, entitled ‘Enhanced top soil carbon stocks under organic farming’ with the assumption that comparable results could be achieved on half the world’s grasslands. In it, he also significantly reduces the degree to which he claims HPG could tackle climate change, as compared to his TED talk (see extract above), saying that he stated that

“we could achieve certain atmospheric results: a significant lowering of the carbon dioxide concentration in the air”.

Finally, he highlights two recent studies (here, and here) as examples of research showing the impact of grazing to regenerate soil and sequester carbon in soils. 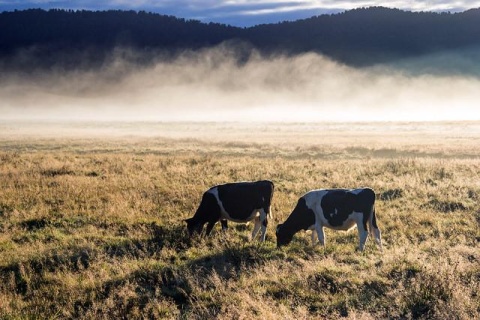