Greedy or needy? Land use and climate impacts of food in 2050 under different livestock futures

This new paper by FCRN member Elin Röös , the FCRN’s Tara Garnett and colleagues explores the following questions: What would be the implications, for land use and greenhouse gas emissions, if our global population moved away from eating beef and other ruminant meats and switched mostly to chicken? What if we all went vegan? What if all our meat demand were met by artificial meat? Or what  if, in an attempt to avoid ‘feed-food’ competition, we limited our consumption of animal products to what we could obtain by rearing animals on grasslands and feeding them byproducts and food waste?

Some of these ’livestock futures’ were imagined and explored in a qualitative, narrative fashion in the 2015 FCRN report Gut Feelings and possible tomorrows.

This paper however attempts to quantify these scenarios – as regards their effects on land use and greenhouse gas emissions.

The paper builds upon the original scenarios by modelling a wider range of different livestock production and consumption scenarios that differ in the types of animal product consumed and (of which more later) in how they are produced.

The consumption-related differences are as follows: In a first, business as usual (BAU) scenario, the types of meat we eat in 2050 are in similar proportion to what we consume today and the systems of production stay the same. In a second scenario we cut down ruminant meat, and shift to poultry but continue consuming dairy products (and the ruminant meat that inevitably comes from that). In a third we avoid all terrestrial meat and replace with farmed fish, continuing to eat dairy (and meat from dairy systems).  Fourth is a speculative scenario where we only consume artificial meat and milk not produced by animals (see this FCRN blog on artificial meat). A fifth is a plant-based future. The sixth and final scenario is a ‘livestock on leftovers’ one where we consume animal products that have been reared mainly on by-products and land unsuited to cropping; Cattle are reared on grass from pastures and byproducts derived from food produced for direct human consumption; and pigs are fed food waste together with oilseed cake and a small quantity of cereals to achieve a balanced ration.

Each scenario has a ‘projected diet’ and ‘healthy diet’ variant. In the ‘projected diets’ version the quantities of meat and other foods follow a BAU increase to 2050 (except in the ‘livestock on leftovers’ scenario where consumption is limited by the availability of pasture land and byproducts). In the ‘healthy diets’ variant the diets adhere to dietary guidelines, meaning that, among other changes, the meat component of the diet is lower than BAU.

The paper also models some different production side possibilities that could have climate or land use mitigatory effects: intensification of livestock production, crop yield increases and food waste reductions.

In all, 56 scenarios were modelled, each of which represents a different configuration of production and consumption possibilities.

For each scenario the implications for greenhouse gas emissions and land use were quantified. In addition, the paper more qualitatively discusses how different mitigation options might affect other environmental issues, as well as concerns about animal and human welfare.

The study finds that scenarios that exclude farmed animals and rely on either plants or artificial meat and milk production considerably reduce both the need for land and emissions. However, increases in crop yields from today’s levels are needed even in livestock-free food systems if the current cropland area is to suffice for feeding the projected population in 2050 – in other words, if land use change is to be avoided.

Intensification of livestock production also dramatically reduces the need for land and emissions but (as discussed, but not quantified) is associated with several risks including impaired animal welfare, increased risk of point source pollution and antibiotics resistance.

Note that these estimates should be seen as a maximal potential since the underlying assumptions are very optimistic (e.g. 80% or all food waste used as feed, high utilization rates of pastures, high milk yields). The paper points out too that intensive use of pastures may come with negative consequences, for example for biodiversity. Emission of greenhouse gases from agriculture in the projected diets leftovers scenario are similar to current levels because of the relatively high number of ruminants reared.  Emissions in the healthy diet variant are lower because meat consumption is capped.

The figures, copied from the paper, illustrate the results for land use and GHG emissions respectively.

Implications for land use

The paper’s conclusions are as follows:

”... to achieve a sustainable food future, action is needed on all fronts; supply, demand and waste. In other words, more food is needed and less resource-demanding (‘less greedy’) diets need to be the norm. Ultimately, stakeholder prioritisation between these strategies will be based on what views stakeholders hold about human nature and on the possibilities for technological, behavioural and institutional change. By providing scientific data connected explicitly to these underpinning perspectives, as we attempted here, it is hoped that future discussion will be more constructive and decisions on future food policy more substantiated.”

Both supply and demand side changes are necessary to achieve a sustainable food system. However, the weight accorded to these depends on one’s view of what the priority goals are for the food system and the extent to which production systems versus consumption patterns are open to change. Some stakeholders see the problem as one of ‘not enough food’ and focus on the need to sustainably increase supply, while others consider the resource demanding and ‘greedy’ consumption patterns of the Western world as the main problem and emphasize the need to shift diets.  In this study global land use and greenhouse gas emissions are estimated for a set of scenarios, building on four ‘livestock futures’ reflecting these different perspectives. These scenarios are: further intensification of livestock systems; a transition to plant-based eating; a move towards artificial meat and dairy; and a future in which livestock production is restricted to the use of ‘ecological leftovers’ i.e. grass from pastures, food waste and food and agricultural byproducts. Two dietary variants for each scenario are modelled: 1) a projected diet following current trends and 2) a healthy diet with more fruits and vegetables and fewer animal products, vegetable oils and sugar. Livestock production in all scenarios (except the baseline scenario) was assumed to intensify to current levels of intensive production in North-Western Europe. For each scenario, several variant assumptions about yield increases and waste reductions were modelled. Results show that without improvements in crop productivity or reductions on today’s waste levels available cropland will only suffice if production of all protein currently supplied by animal foods is replaced by (hypothetical) artificial variants not requiring any land. With livestock intensities corresponding to current ones in North-Western Europe and with yield gaps closed by 50% and waste reduced by 50%, available cropland will suffice for all scenarios that include a reduction of animal products and/or a transition to poultry or aquaculture. However, in the scenario based on an extrapolation of current consumption patterns (animal product amounts and types consumed in proportions corresponding to the current average consumption in different world regions) and with livestock production based on feed from cropland, available cropland will not be enough. The scenario that makes use of pastures for ruminant production and food waste for pigs, uses considerably less cropland and could provide 40-56 kg per capita per year of red meat. However, such a livestock future would not reduce GHG emissions from agriculture on current levels. This study confirms previous research that to achieve a sustainable food future, action is needed on all fronts; improved supply and reduced demand and waste.

You can find the full paper here (open access).

You may also be interested in the following papers: 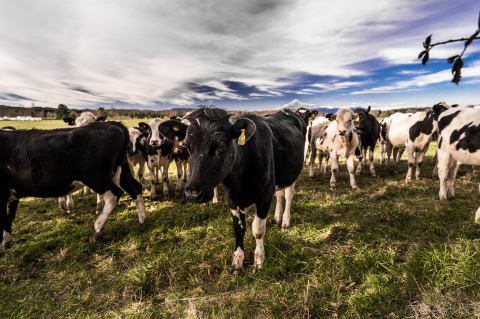