Cutting carbon emissions could have indirect effects on hunger

A new paper published in Environmental Science and Technology finds that measures to mitigate agricultural GHG emissions potentially risk increasing global hunger more than the impacts of climate change on crop yields itself.  The study draws upon global models to quantify:  a. the impact of climate change on yields in the absence of mitigation, b. the impact of bionergy production (as one mitigation measure) on competition for land and associated food prices and c. finally, the costs associated with mitigating the impacts of climate change by introducing a carbon tax.  Introduction of this tax is assumed to lead to increase in use of renewable fuels (wind, power, geothermal, bionenergy) and ‘abatement from non energy sources’ – which presumably includes agriculture although they do not specify what sort of abatement this would be.

It finds that the increase in energy costs resulting from a carbon tax lowers incomes and thus reduces food affordability – this effect is more pronounced than the actual impact on food prices itself (ie. the reduction in incomes is the problem rather than increased food prices).

It suggests that this is not an argument for not mitigating climate change but doesn’t elaborate further.

Note several points about the article:

·       Second, it doesn’t look at food related measures to mitigate emissions, such as reductions in food losses in waste and dietary changes, that could improve prospects for food security as a whole.

·       Third it does not consider how carbon financing – ie the flow of money from rich to poor countries  to help the adapt to and mitigate emissions -  might reduce costs, for low income countries.

·       Fourth it considers the impacts of climate change on crop yields but it does not consider the impacts of climate change on global society as a whole – ie. affecting all sectors and all aspects of our lives.  According to the Stern Review on the Economics of Climate Change, the costs of inaction far outweigh the costs of action (note that this was published in 2006 – if anyone is aware of a more recent comprehensive study of this nature please get in touch).

Climate change and mitigation measures have three major impacts on food consumption and the risk of hunger: (1) changes in crop yields caused by climate change; (2) competition for land between food crops and energy crops driven by the use of bioenergy; and (3) costs associated with mitigation measures taken to meet an emissions reduction target that keeps the global average temperature increase to 2 °C. In this study, we combined a global computable general equilibrium model and a crop model (M-GAEZ), and we quantified the three impacts on risk of hunger through 2050 based on the uncertainty range associated with 12 climate models and one economic and demographic scenario. The strong mitigation measures aimed at attaining the 2 °C target reduce the negative effects of climate change on yields but have large negative impacts on the risk of hunger due to mitigation costs in the low-income countries. We also found that in a strongly carbon-constrained world, the change in food consumption resulting from mitigation measures depends more strongly on the change in incomes than the change in food prices.

See further resources climate change mitigation as well as climate change impacts and adaptation in our research library. You might also find the categories with resources on biofuels and climate trends/projections interesting. 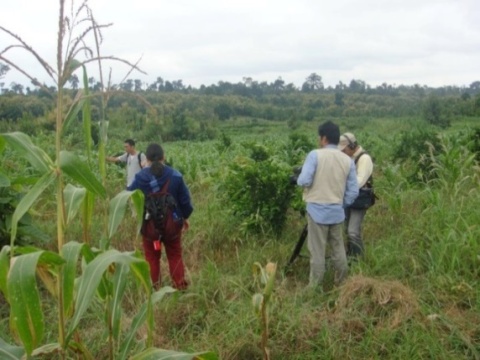