Composition differences between organic and conventional meat and milk

Two recent systematic literature reviews conclude that both organic milk and meat contain around 50% more beneficial omega-3 fatty acids than conventionally produced products. The team led by Newcastle University, reviewed 196 papers on milk and 67 papers on meat and found clear differences between organic and conventional milk and meat, especially in terms of fatty acid composition, and the concentrations of certain essential minerals and antioxidants.

Omega-3s are linked to reductions in cardiovascular disease, improved neurological development and function, and better immune function. However organic milk contains less iodine than conventional milk: daily consumption of half a litre of conventional milk provides 88% of the UK recommended daily iodine intake of 140 µg, whereas consuming the same amount of organic milk only provides 53% of the recommended daily intake.

Other researchers argue however that it is rather the choice of feed and not the organic farming method per se that accounts for the difference in the nutritional profile and also question whether the increased amount of Omega 3 is nutritionally relevant.

Here are a few other articles that look (partially at least) at health issues associated with organically farmed foods:  Two synthesis reports from ICROFS and SLU, a 2012 systematic review that finds no support for organic food being more healthy than conventional, and an earlier study (2009), also a systematic review,  which came to similar conclusions. Another meta -analysis from 2011 did however find some health benefits from organic food.  You can also read an earlier paper by the Newcastle research team and a paper on pesticide exposure form organic food. There is also a report by the NGO Compassion in World Farming on Nutritional Benefits Of Higher Welfare Animal Products.

Meat: Demand for organic meat is partially driven by consumer perceptions that organic foods are more nutritious than non-organic foods. However, there have been no systematic reviews comparing specifically the nutrient content of organic and conventionally produced meat. In this study, we report results of a meta-analysis based on sixty-seven published studies comparing the composition of organic and non-organic meat products. For many nutritionally relevant compounds (e.g. minerals, antioxidants and most individual fatty acids (FA)), the evidence base was too weak for meaningful meta-analyses. However, significant differences in FA profiles were detected when data from all livestock species were pooled. Concentrations of SFA and MUFA were similar or slightly lower, respectively, in organic compared with conventional meat. Larger differences were detected for total PUFA and n-3 PUFA, which were an estimated 23 (95 % CI 11, 35) % and 47 (95 % CI 10, 84) % higher in organic meat, respectively. However, for these and many other composition parameters, for which meta-analyses found significant differences, heterogeneity was high, and this could be explained by differences between animal species/meat types. Evidence from controlled experimental studies indicates that the high grazing/forage-based diets prescribed under organic farming standards may be the main reason for differences in FA profiles. Further studies are required to enable meta-analyses for a wider range of parameters (e.g. antioxidant, vitamin and mineral concentrations) and to improve both precision and consistency of results for FA profiles for all species. Potential impacts of composition differences on human health are discussed.

Milk: Demand for organic milk is partially driven by consumer perceptions that it is more nutritious. However, there is still considerable uncertainty over whether the use of organic production standards affects milk quality. Here we report results of meta-analyses based on 170 published studies comparing the nutrient content of organic and conventional bovine milk. There were no significant differences in total SFA and MUFA concentrations between organic and conventional milk. However, concentrations of total PUFA and n-3 PUFA were significantly higher in organic milk, by an estimated 7 (95 % CI −1, 15) % and 56 (95 % CI 38, 74) %, respectively. Concentrations of α-linolenic acid (ALA), very long-chain n-3 fatty acids (EPA + DPA + DHA) and conjugated linoleic acid were also significantly higher in organic milk, by an 69 (95 % CI 53, 84) %, 57 (95 % CI 27, 87) % and 41 (95 % CI 14, 68) %, respectively. As there were no significant differences in total n-6 PUFA and linoleic acid (LA) concentrations, the n-6:n-3 and LA:ALA ratios were lower in organic milk, by an estimated 71 (95% CI −122, −20)% and 93 (95 % CI −116, −70) %. It is concluded that organic bovine milk has a more desirable fatty acid composition than conventional milk. Meta- analyses also showed that organic milk has significantly higher α-tocopherol and Fe, but lower I and Se concentrations. Redundancy analysis of data from a large cross-European milk quality survey indicates that the higher grazing/conserved forage intakes in organic systems were the main reason for milk composition differences. 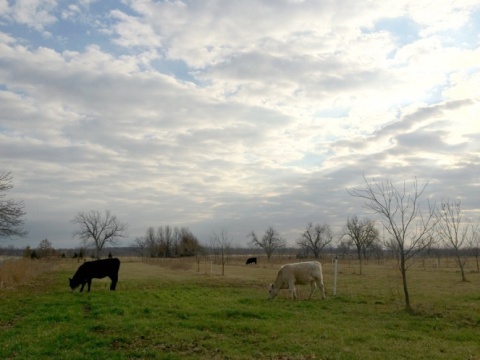