This systematic review confirms earlier findings that a number of well-categorised sustainable dietary patterns are also good for health outcomes. There was consistent evidence to suggest that diets higher in plant-based foods such as vegetables, fruits, legumes, seeds, nuts, and whole grains and lower in animal-based foods (especially red meat), are both healthier and associated with a lower impact on the environment.

The systematic review included 23 studies and attempted to answer the following question: what is the relation between population-level dietary patterns that promote health and long-term food sustainability? The relations were compared across studies which had different methodologies (including randomized and nonrandomized controlled trials, prospective cohort studies, cross-sectional studies, case-control studies, modelling studies, life cycle assessments, and land use analysis). The paper goes through the findings of most of the studies included in the analysis, grouping them by object of study or methodology.

To support food security for current and future generations, there is a need to understand the relation between sustainable diets and the health of a population. In recent years, a number of studies have investigated and compared different dietary patterns to better understand which foods and eating patterns have less of an environmental impact while meeting nutritional needs and promoting health. This systematic review (SR) of population-level dietary patterns and food sustainability extends and updates the SR that was conducted by the 2015 US Dietary Guidelines Advisory Committee, an expert committee commissioned by the federal government to inform dietary guidance as it relates to the committee’s original conclusions. In the original SR, 15 studies met the criteria for inclusion; since then, an additional 8 studies have been identified and included. The relations between dietary intake patterns and both health and environmental outcomes were compared across studies, with methodologies that included modeling, life cycle assessment, and land use analysis. Across studies, consistent evidence indicated that a dietary pattern higher in plant-based foods (e.g., vegetables, fruits, legumes, seeds, nuts, whole grains) and lower in animal-based foods (especially red meat), as well as lower in total energy, is both healthier and associated with a lesser impact on the environment. This dietary pattern differs from current average consumption patterns in the United States. Our updated SR confirms and strengthens the conclusions of the original US Dietary Guidelines Advisory Committee SR, which found that adherence to several well-characterized dietary patterns, including vegetarian (with variations) diets, dietary guidelines–related diets, Mediterranean-style diets, the Dietary Approaches to Stop Hypertension (DASH) diet, and other sustainable diet scenarios, promotes greater health and has a less negative impact on the environment than current average dietary intakes.

You can find the full paper here.

One of the authors of this paper, Mike Hamm, is an FCRN member. He was an advisor to the US Dietary Guidelines Advisory Committee (DGAC).  This committee considers the latest evidence on diets and on the basis makes recommendations to Government, for it to take account in its five yearly update of the national dietary guidelines.  In 2015 the DGAC recommended that the guidelines should incorporate sustainability considerations, but these recommendations were not accepted or taken up by the government. A blog by Mike Hamm on this issue can be found here. 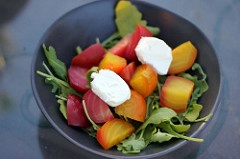