The Health Council of the Netherlands (the Dutch Dietary Guidelines Committee 2015) has published an updated set of Dutch dietary guidelines.

This paper describes the scientific process behind the creation of the guidelines focusing on describing the methodology used and the evidence on which the new guidelines are based.

The new guidelines include a recommendation that people should not eat more than two servings of red meat per week – the first time this recommendation has been made in the Netherlands.

The paper states that: “The consumption of animal products also needs adjustment. Although the scientific data are not as solid as those for plant products, it is plausible that moderation of meat consumption is good for health. The consumption of both processed meat and red meat (especially for men) is on a level that is associated with a higher risk of chronic diseases. In contrast, it is favourable to eat more fish. As only half of the Dutch population eats fish twice or three times a month, an increase to one serving a week is beneficial for health.”

Further more: “Limiting meat consumption is also desirable from an ecological perspective. Generally, a more plant-food- and less animal-food-based dietary pattern is associated with a lower ecological burden. It means that for a high dairy consumption moderation is also advisable. This also holds for fish: compared with the 2006 guideline (two servings of fish a week), the current guideline to eat fish once a week results in a lower ecological burden. For fish consumption, it is recommended to emphasize that the types of fish that are not overfished or are cultivated in an environment-friendly manner are eaten. From an ecological perspective, it is not enough to adhere to the guidelines. To limit the food-related ecological burden, also measures are needed in the production lines.”

The Netherlands Nutrition Centre hastranslated the guidelines given above into public information on healthy eating. In this process, dietary reference values were also taken into account.  The new guidelines are presented in the Wheel of Five (“Schijf van Vijf”) and they say (in Dutch – as translated by Google translate):

“Do not eat more than 500 grams of meat per week of which a maximum of 300 grams of red meat. Red meat is defined as meat from cattle, sheep, goats and pigs. If you eat a lot of red meat, you have a higher risk of colon cancer, stroke and type 2 diabetes (diabetes). Red meat impacts on the environment even more than white meat (chicken or other poultry), fish and egg. /…/ Processed meat is not in the Wheel of Five and should be eaten very limited.”

The guidelines also include a recommendation for how to eat during a week: “…one day fish, one day legumes, nuts one day, two days beef or pork, and two days chicken or other poultry.

The objective of this study was to derive food-based dietary guidelines for the Dutch population. The dietary guidelines are based on 29 systematic reviews of English language meta-analyses in PubMed summarizing randomized controlled trials and prospective cohort studies on nutrients, foods and food patterns and the risk of 10 major chronic diseases: coronary heart disease, stroke, heart failure, diabetes, breast cancer, colorectal cancer, lung cancer, chronic obstructive pulmonary disease, dementia and depression. The committee also selected three causal risk factors for cardiovascular diseases or diabetes: systolic blood pressure, low-density lipoprotein cholesterol and body weight. Findings were categorized as strong or weak evidence, inconsistent effects, too little evidence or effect unlikely for experimental and observational data separately. Next, the committee selected only findings with a strong level of evidence for deriving the guidelines. Convincing evidence was based on strong evidence from the experimental data either or not in combination with strong evidence from prospective cohort studies. Plausible evidence was based on strong evidence from prospective cohort studies only. A general guideline to eat a more plant food-based dietary pattern and limit consumption of animal-based food and 15 specific guidelines have been formulated. There are 10 new guidelines on legumes, nuts, meat, dairy produce, cereal products, fats and oils, tea, coffee and sugar-containing beverages. Three guidelines on vegetables, fruits, fish and alcoholic beverages have been sharpened, and the 2006 guideline on salt stayed the same. A separate guideline has been formulated on nutrient supplements. Completely food-based dietary guidelines can be derived in a systematic and transparent way.

Read the full paper (open access) here and see the Gezondheidsraad’s (Health council) report upon which the guidelines are based here.

If you know Dutch you can read the new guidelines for the public here (Wheel of Five –Schijf van Vijf). The guidelines have been covered in English by both National Geographic and Think Progress.

You can read more in our research library in the category on food and agriculture policy and the keyword categories about dietary guidelines and sustainable healthy diets. 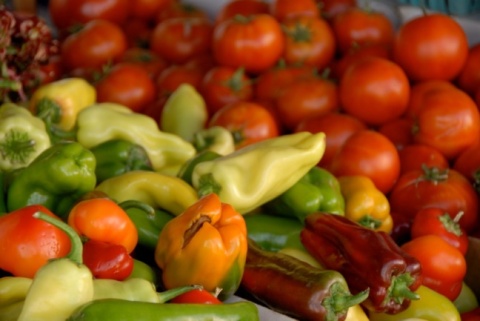