Why is meat so important in Western history and culture? A genealogical critique of biophysical and political-economic explanations

This paper reviews the evidence on two widespread explanations for the importance of meat in Western history and culture: biophysical and political-economic. The first is the notion that meat eating is essential to both human nutrition and agricultural sustainability, whereas the second puts forward the argument that meat eating practices are largely determined by consumers’ relationships to the means of production and the power of government and corporations.

The authors argue that in fact, ‘except under conditions of environmental scarcity, the meaning, value, and legitimacy of meat cannot be attributed to intrinsic biophysical value or to the political-economic actors who materially benefit from it.’ Instead, they assert, it is impossible to understanding the importance of meat without examining its cultural roots.

The authors conducted a so-called genealogical analysis of meat production and meat culture during thousands of years of Western history. This type of analysis focuses on historical and cultural practices, paying particular attention to relations of power. The authors used literature from a very wide range of fields including anthropology, zooarchaeology, agricultural and environmental history, public health and nutrition, rural and environmental sociology, gender studies, consumer culture, science and technology studies, and religious studies.

In the article, the authors outline the evolution of meat consumption through different epochs, from the origins of Homo sapiens (200,000 years ago) through various stages of Western history until the present. For each historical era, they describe meat’s political-economic and biophysical value, the practical drawbacks of meat production and consumption, and the cultural imperatives that ensured meat’s importance in the respective societies.

An observation made by the authors is that over the past century, western cultures have built upon and extended already existing myths and discourses of meat eating and its relationship to masculinity, vitality, and racial superiority. The outcome of this strengthened connection is that meat eating is perceived and promoted by academics, the general public, advertisers, and industry as ‘natural, necessary and normal’. (See for example, Arcari (2016) who reports that all 15 of the most prominent reports on climate change, sustainability, and food security analysed describe meat as a natural and necessary part of the human diet.)

The article also addresses the popular so-called paleo diet argument for meat eating, which holds that hominids in the Paleolithic era and before were at a “Golden Age” of human health and sustainability and that high consumption of meat was the norm and, for health reasons, should be now. Yet studies have shown that early hunter-gatherer diets were diverse and highly variable. In fact, dental evidence shows that early hominids from 2 to 3 million years ago indicates that a primarily plant-based diet including grain was the norm and that meat consumption was only complementary.

How did meat emerge to become such an important feature in Western society? In both popular and academic literatures, biophysical and political-economic factors are often cited as the reason for meat’s preeminent status. In this paper, we perform a comprehensive investigation of these claims by reviewing the available evidence on the political-economic and biophysical features of meat over the long arc of Western history. We specifically focus on nine critical epochs: the Paleolithic (200,000 YA—10,000 YA), early to late Neolithic (10,000 YA—2500 BCE), antiquity (2500 BCE—550 CE), ancient Israel and early Christian societies (1550 BCE—379 CE), medieval Europe (476 CE—1400 CE), early modern Europe (1400–1800), colonial America (1607–1776), the American frontier (1776–1890), and the modern industrial era (1890—present). We find that except under conditions of environmental scarcity, the meaning and value of meat cannot be attributed to intrinsic biophysical value or to the political-economic actors who materially benefit from it. Rather, meat’s status reflects the myriad cultural contexts in which it is socially constructed in people’s everyday lives, particularly with respect to religious, gender, communal, racial, national, and class identity. By deconstructing the normalized/naturalized materialist assumptions circling around meat consumption, this paper clears a space for a more nuanced appreciation of the role that culture has played in the legitimation of meat, and by extension, the possibility of change.

Chiles, R.M. and Fitzgerald, A.J., 2017. Why is meat so important in Western history and culture? A genealogical critique of biophysical and political-economic explanations. Agriculture and Human Values, pp.1-17. 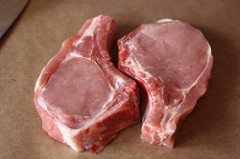