New evidence suggests that a chemical mechanism operating in the roots of a tropical grass used for livestock feed holds enormous promise for reducing the emission of nitrous oxide. N2O is the most harmful of the warming gases, with a global warming potential 296 times that of carbon dioxide. According to the UN Food and Agriculture Organisation (FAO), the livestock sector accounts for 65 percent of the nitrous oxide emitted.

The mechanism is known as “biological nitrification inhibition” or BNI, and the grass in which it has been observed belongs to the Brachiaria species commonly found in east and central Africa and which has also been introduced into Latin America.  Animals that consume the grass produce higher yields of milk and their manure emits lower amounts of nitrous oxide.

“Livestock production provides livelihoods for a billion people, but it also contributes about half of agriculture’s greenhouse gas emissions,” said Michael Peters, who leads research on forages at the International Center for Tropical Agriculture (CIAT), based in Colombia.  “BNI is a rare triple-win technology that’s good for rural livelihoods as well as the global environment and climate”.

Other research has shown that deep-rooted, productive Brachiaria grasses can capture atmospheric carbon on a scale similar to that of tropical forests, another means through which it can help mitigate emissions.

Today’s crop and livestock systems are described as very ‘leaky’ according to researcher G.V. Subbarao who states that about 70 percent of the 150 million tons of nitrogen fertilizer applied globally is lost through nitrate leaching and nitrous oxide emissions. This lost fertilizer has an annual estimated value of US$90 billion. CIAT scientist Idupulapati Rao further explained the nitrogen leakage potential of BNI:

“Grassland pastures are the single biggest use of agricultural land—covering 3.2 billion hectares out of a global total of 4.9 billion. In Brazil alone, 11 million hectares of grassland have been converted to maize and soybean production. Instead of more monocropping, developing countries need to integrate Brachiaria grasses into mixed crop-livestock systems on a massive scale to make them more sustainable.”

You can read a blog post about the new research at the CIAT website and another online summary of this new research is available at the ILRI website.  IRIN has also produced an article on this subject, read it here.

Do you have comments on the usefulness and possible benefits of Brachiaria grass? Is this potential of reducing nitrous oxide achievable and are there constraints or tradeoffs that need to be considered? We welcome you to present your views and comment on this article on our website.  You can do this by clicking the article’s headline or the “read in browser” button. 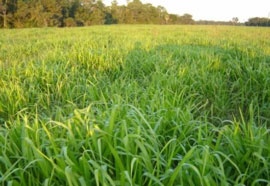