A systematic review of the effectiveness of food taxes and subsidies to improve diets: Understanding the recent evidence

Food taxes & subsidies are effective at improving diets, according to a systematic review carried out by Australian researchers and published in the journal Nutrition Reviews. The systematic review analyses evidence from research published between January 2009 and March 2012 looking at the effectiveness of food taxes and subsidies on consumption. Included in the review were only papers assessing a specific food tax and those which directly and prospectively observed consumer responses to a fiscal policy intervention.

The study is intended to assist policymakers to interpret evidence since it reviews wide range of study types and provides a framework for assessing the different types of evidence available. The paper states that fiscal measures can be effective in promoting desired dietary changes. Based on the evidence reviewed, the researchers write that: “soft drink taxes and subsidies appear most effective in inducing consumption change, with strong evidence from robust modeling studies and one RCT, although there is some evidence that subsidies can increase overall calorie consumption”.

For taxes on fat, sugar, and salt they were showed to have a relatively small but positive effect on consumption of target nutrients but they also pose a challenge for influencing consumption as they sometimes lead to unintended consequences while applying both to “core” foods, meaning those recommended by dietary guidelines, as well as unhealthier foods. When it comes to nutrient profile taxes, these appeared less likely than targeted nutrient taxes to have unintended consequences and are also less likely to apply to “core” foods, since the selection of target foods is based on the entire nutrient composition of the foods. The review showed consistent effects on target food consumption for taxes and subsidies ranging from 10 to 20%, with proportionately larger effects for larger taxes as well as for taxes and tax/subsidy combinations on noncore foods or beverages (such as unhealthy grain products or soft drinks) for which there are close untaxed substitutes.

There has been significant growth in political, public, media, and academic interest in taxes and subsidies to encourage healthy food consumption over the past 3 years. The present systematic review, including an assessment of study quality, was conducted on new evidence published between January 2009 and March 2012 for the effect of food taxes and subsidies on consumption. Forty-three reports representing 38 studies met the inclusion criteria. Two of these were prospective randomized controlled trials that showed price changes were effective in both grocery store purchasing (subsidy) and away-from-home food purchasing (tax) contexts. The most robust modeled studies (considering substitution) showed larger effects for taxes on noncore foods or beverages for which there are close untaxed substitutes (such as soft drinks or “unhealthy” foods, based on nutrient profiling). Taxes and subsidies are likely to be an effective intervention to improve consumption patterns associated with obesity and chronic disease, with evidence showing a consistent effect on consumption across a range of tax rates emerging. Future research should use prospective study methods to determine the effect of taxes on diets and focus on the effect of taxation in conjunction with other interventions as part of a multisectoral strategy to improve diets and health.

You can find a list of other similar studies looking at the effects of food taxes (some of them also looking at the implications for GHG emissions) in our research library, here and here. 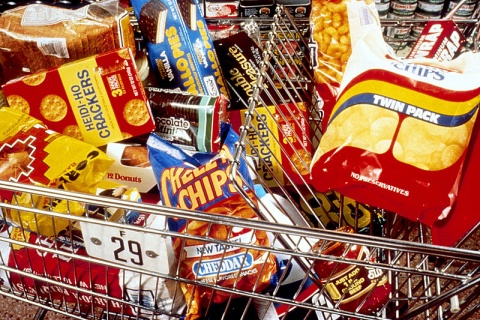