This study compares real world observations of the age of carbon in soils, to soil carbon’s age as represented in earth system models that are used to make climate change projections. It then explores the implications of the results, by modelling expected future levels of carbon storage in global soils, occurring in response to increasing levels of atmospheric carbon dioxide. To illustrate the difference, modelled increases in soil carbon storage are contrasted both before and after updating earth systems models to reflect these real-world observations.

This study compares real world observations of the age of carbon in soils, to soil carbon’s age as represented in earth system models that are used to make climate change projections. It then explores the implications of the results, by modelling expected future levels of carbon storage in global soils, occurring in response to increasing levels of atmospheric carbon dioxide. To illustrate the difference, modelled increases in soil carbon storage are contrasted both before and after updating earth systems models to reflect these real-world observations.

The findings show that earth system models don’t represent soil processes accurately, with the mean soil age in the models found to be six times lower than that found in actual soils. When earth system models are then modified to be consistent with observations, the study goes on to show that the potential for global soils to store additional carbon is overestimated by almost a factor of two. The results demonstrate the need to improve earth system models’ representation of soil processes and suggests that current long-term projections of global warming may have underestimated future warming, although to what degree is not investigated in the paper.

In response to widespread media reporting of this study, it is important to clarify that these findings do not comment on the potential for changes in the management and use of land, to sequester carbon into soils on agricultural land. This is because the scope of this study is limited to evaluating the way in which soil processes are represented within earth systems models, and to understanding the future climate implications of this for a specific soil-related feedback processes.

To evaluate the way in which earth system models represent soil processes, the average length of time that carbon remained in soils (the soil carbon age) in the models was compared to direct observations of the soil carbon age in 157 globally representative soil profiles. The age of carbon in the soil samples was determined using radiocarbon dating of the carbon-14 isotope. For the earth systems models, the turnover rate was calculated by connecting them to another, soil specific model, and then using this, the soil age was derived using both the turnover rate and known historical atmospheric levels of carbon-14, as constraints on the model.

The comparison revealed a large disparity in the age between the modelled and observed soils, with the average soil age of the earth systems models found to be 430 ± 50 years, whereas the average age in the observed soils was found to be 3100 ± 1800 years. Because a lower average age indicates a greater amount of newly incorporated carbon in the soils, this shows that rates of carbon storage in earth systems models are unrealistically high. The likely reason for this was explained in the study as being the consequence of incomplete representation of key biogeochemical processes and difficulties in developing accurate parameterizations for soil carbon at a global scale

The finding has important implications for a feedback represented in earth system models, known as the carbon-concentration feedback, because it shows that currently, models overestimate its strength and so also its ability to attenuate greenhouse gas emissions. The feedback acts to store more carbon in soils as atmospheric levels of carbon dioxide increase, due to the fact that increased atmospheric levels of carbon dioxide, stimulates additional photosynthesis and plant growth above and below ground, thereby increasing the levels of carbon inputs into soils. Some of this carbon may remain there for decades or longer, effectively taking carbon dioxide out of the atmosphere and storing it soils.

The difference this made for carbon storage, was then investigated by amending the way in which earth system models represent soil processes and comparing the levels of carbon stored by them both before and after the changes. To do so a single scenario was used which increased atmospheric carbon dioxide levels over a 140-year period, from preindustrial levels up to 1140 ppm. It should be noted, that this represents a business-as-usual scenario where carbon dioxide levels greatly exceed those consistent with a 2˚C level of warming (~450 ppm). The results of this comparison are presented in the graph below which shows that on average, improving the modelling of soil carbon in earth systems models so that it is consistent with observations, led to a 40% ± 27% (or 170 ± 127 Pc C) decline in the amount of additional soil carbon stored at the end of the 140 year simulation.

Overall, when also including the effects of another, weaker, feedback that increases the breakdown and emissions of soil carbon with increasing temperatures, the net effect was a reduction in the soil carbon sink over the 140-year simulation, by over a factor of two (52.5%). These findings therefore demonstrate, that less soil carbon sequestration than previously thought can be expected, due to the effect of soil carbon feedbacks associated with elevated levels of atmospheric carbon dioxide.

Soil is the largest terrestrial carbon reservoir and may influence the sign and magnitude of carbon cycle–climate feedbacks. Many Earth system models (ESMs) estimate a significant soil carbon sink by 2100, yet the underlying carbon dynamics determining this response have not been systematically tested against observations. We used 14C data from 157 globally distributed soil profiles sampled to 1-meter depth to show that ESMs underestimated the mean age of soil carbon by a factor of more than six (430 ± 50 years versus 3100 ± 1800 years). Consequently, ESMs overestimated the carbon sequestration potential of soils by a factor of nearly two (40 ± 27%). These inconsistencies suggest that ESMs must better represent carbon stabilization processes and the turnover time of slow and passive reservoirs when simulating future atmospheric carbon dioxide dynamics. 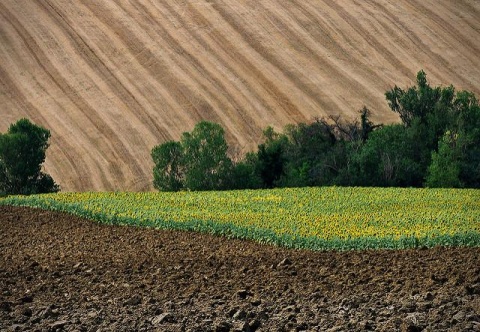