This study follows a cohort of around 100,000 people over the course of 20 years.  It looks at the associations between changes in red meat consumption and the incidence of type 2 diabetes mellitus (T2DM). All participants started out as red meat eaters.

The citation and abstract are as follows:

Importance: Red meat consumption has been consistently associated with an increased risk of type 2 diabetes mellitus (T2DM). However, whether changes in red meat intake are related to subsequent T2DM risk remains unknown.

Objective: To evaluate the association between changes in red meat consumption during a 4-year period and subsequent 4-year risk of T2DM in US adults.

Design and Setting: Three prospective cohort studies in US men and women.

Results: During 1,965,824 person-years of follow-up, we documented 7,540 incident T2DM cases. In the multivariate-adjusted models, increasing red meat intake during a 4-year interval was associated with an elevated risk of T2DM during the subsequent 4 years in each cohort (all P < .001 for trend). Compared with the reference group of no change in red meat intake, increasing red meat intake of more than 0.50 servings per day was associated with a 48% (pooled hazard ratio, 1.48; 95% CI, 1.37-1.59) elevated risk in the subsequent 4-year period, and the association was modestly attenuated after further adjustment for initial body mass index and concurrent weight gain (1.30; 95% CI, 1.21-1.41). Reducing red meat consumption by more than 0.50 servings per day from baseline to the first 4 years of follow-up was associated with a 14% (pooled hazard ratio, 0.86; 95% CI, 0.80-0.93) lower risk during the subsequent entire follow-up through 2006 or 2007.

In the discussion section the authors write:

In these 3 large prospective cohorts of US men and women, 4-year increases in red meat consumption were positively associated with subsequent 4-year risk of T2DM, independent of initial red meat intake and changes in other lifestyle factors, including overall diet quality and body weight. This association was observed for unprocessed and processed red meat. Decreasing red meat intake was not associated with an acute but rather a prolonged reduced risk of T2DM. Three meta-analyses of prospective cohort studies have reported a positive association between red meat intake and T2DM. However, most previous studies evaluated the relationship between meat intake at baseline and T2DM risk with limited information during follow-up. Because individuals’ eating behaviors may change over time, a single time measurement may not capture the variability of red meat intake during follow-up. To our knowledge, this study is the first to investigate the association between changes in red meat intake and subsequent T2DM risk. Our results are largely consistent with previous reports but extend the findings to suggest that increasing red meat intake is followed by an elevated risk of T2DM in a consistent high intake was related to a greater risk of T2DM compared with a consistent low level, and this risk rose quickly and substantially (almost 2-fold) when increasing intake from low to high levels. Changing from high to low levels did not completely mitigate the increased risk within 4 years for people with initial high red meat intake; however, the analysis of change during the first 4 years in relation to T2DM during the entire follow-up period suggests that reducing red meat intake still has a long-term benefit.

You can access the paper here (journal subscription needed):

The Independent covers the paper here. 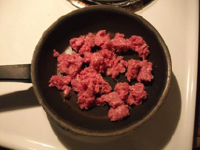