The protein shift: will Europeans change their diet?

This report by Dutch bank ING considers the potential for a protein shift away from animal to plant protein. It finds that a quarter of EU consumers expects to eat less meat in five years’ time, mainly because of the concerns about the associated negative health effects. In addition, it poses that a further shift in consumer preferences is likely as the level of innovation in alternative protein is high and governments are increasingly concerned about the carbon footprint of diets.

The report argues that demand for meat in particular will likely drop in the future. This is because 1) meat consumption per capita in the EU has stabilised at a high level between 1990 and 2015, 2) consumers have intentions to reduce their meat intake, and 3) some governments are keen to support a protein shift. Note within Europe, meat consumption per capita in Western and Southern Europe is falling, while it is rising in Central and Eastern EU member states. On the whole, total animal product consumption is still rising, because of population growth.

The report also notes the high turnover in the retail industry on meat and animal products in the EU in comparison to other food categories. This amounts to over €400 billion spent on animal food products a year.

The report publishes a variety of the results from the ING survey but not all. Additional statistics can be provided on request. You can find the report here. 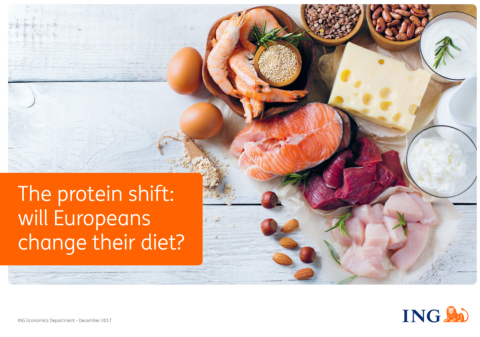