The latest OECD-FAO Agricultural outlook report has been published. It finds that while international agricultural commodity markets appear to have entered calmer conditions after record highs last year, food commodity prices are anticipated to remain on a higher plateau over the next decade, underpinned by firm demand but a slowing growth in global production.

Demand side pressures come from population growth, higher per capita incomes, urban migration and changing diets in developing countries, as well as rising requirements for biofuel feedstocks. At the same time, agricultural output by traditional exporting developed countries has been slow to respond to higher prices in the last decade. Higher demand will be met increasingly by supplies that come to market at higher cost. With farmland area expected to expand only slightly in the coming decade, additional production will need to come from increased productivity, including by reducing productivity gaps in developing countries.

The Outlook anticipates that agricultural output growth will slow to an average of 1.7 percent annually over the next 10 years, down from a trend rate of over 2 percent per year in recent decades. Higher input costs, increasing resource constraints, growing environmental pressures and the impacts of climate change will all serve to dampen the supply response to demand. Developing countries will increasingly dominate in the production of most agricultural commodities, and also take on a more important role in commodity trade.

Both the meat and the dairy sectors are some of the fastest growing production and consumption sectors covered in this report.

On milk: the majority (70%) of global milk production gains over the outlook period is anticipated to come from developing countries, particularly India and China. The projections indicate that the total milk production of developing countries will overtake that of developed countries from 2013 onwards.  The growth in trade is also expected to continue.  Dairy product consumption in developed countries may increase only modestly (with the exception of cheese), while in developing regions the consumption of all products is expected to increase vigorously at around 30% from the base period. This increase is driven by increasing population, income levels, and the growing influence of retail chains and multinational companies which facilitate improved consumer access to dairy products.

You can download the report and associated material here.

The press release is here. 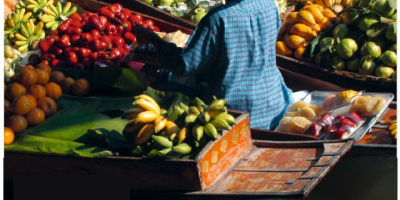