Climate policy progress assessment concludes that many countries are advancing to cut emissions at a similar rate as the UK.  A report by the Global Legislators Organisation (GLOBE international) argues that only a "handful of countries" have not yet engaged with climate change as a policy problem or fail to see it as a legislative priority. Analysing the climate legislation of 66 countries (together accounting for 88 percent of greenhouse gas emissions) it finds that 62 of them have a 'flagship law'. And contrary to commonly held perceptions, it is not just rich countries that are introducing laws to tackle emissions. Countries including Ecuador, Costa Rica, Mexico, China, Indonesia, Kazakhstan, and Kenya are also taking firm legal measures.

Looking more specifically at climate policy trends in comparison to the laws established in the UK, another report by the ESRC Centre for Climate Economics and Policy and the Grantham Research Institute at the London School of Economics argues that all but one (Turkey) of the UK's main trading partners and competitors have set greenhouse gas emissions reduction or limitation targets. This report also argues that the UK is doing well compared to the other countries. Not all of the 'flagship laws' are for example legally binding, or have the statutory force of an act of parliament behind them. The UK's climate act also looks far ahead, covers the whole economy, and urges government to propose emissions reductions a decade a half in advance.

You can read the study by GLOBE international here.  The ESRC and Grantham Research Institute report can be found here. In addition, The Carbon Brief has an article summarising the reports here.

You can read more about climate policy nationally and globally in our research library here. 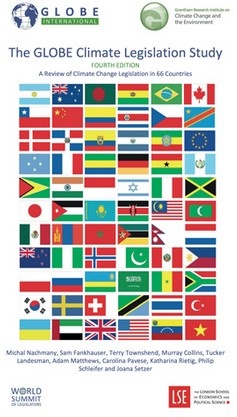