Meat consumption and climate change: The role of non-governmental organisations

This study by researchers at the Johns Hopkins Bloomberg School of Public Health examines the approaches taken by NGOs in the U.S., Canada, and Sweden to encourage consumers to reduce their meat consumption in light of climate change.

The study looked at the level of engagement of the NGOs and the content of their public education and policy efforts. It found that while most NGOs acknowledged the issue and made some mention of meat consumption and climate change on their websites, relatively few groups had established dedicated public education or policy advocacy campaigns on the issue. The study also highlights the fact that consumers currently receive mixed messages with regard to the quantity and types of meat that are appropriate for them to consume given climate change and other environmental concerns 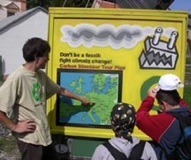