Losses, inefficiencies and waste in the global food system

This paper looks at how we can achieve greater food and nutrition security in a sustainable manner by reducing waste and it also analyses how losses impact overall food system efficiency.  It quantifies the food wasted throughout the food chain (10 stages) from primary production to human food consumption and also looks at the impact of livestock production on both food system biomass efficiency and feed crop losses. The paper defines wasted food energy of livestock production in terms of its poor efficiency in feed conversion ratios (ie. only some of the feed livestock consume end up as meat and dairy, with the rest loss via respiration, dung and urine).

Previous widely cited studies have argued that between 24-30% of all food produced is wasted from production to consumption. This paper, which is primarily based on empirical assessments, analyses losses in the food system as a whole and looks at different waste rates at different stages and for different indicators (i.e. losses of wet and dry mass, protein or energy). It concludes that due to cumulative losses, the proportion of global agricultural dry biomass consumed as food is just 6% of what is produced. Of all the dry matter crops harvested 44% is lost before reaching the consumer and the largest loss happens before harvest.  On losses related to livestock production the authors state:

“The largest losses of dry matter, energy and protein occur in livestock production, but most wet mass is lost during processing. When considering only feed used by livestock, i.e. ignoring livestock inputs from grassland or forage crops, livestock production accounts for 40.4–60.8% of all losses from crop harvest to food consumption.”

Interestingly, this paper also considers over-eating as waste, arguing that this is at least as large a contributor to food system losses as consumer waste. The authors define overconsumption as food consumption in excess of nutritional requirements, and when this is included as an additional inefficiency, 48.4% of harvested crops were found to be lost.

The term ‘waste’ is here used solely with regards to losses incurred by the consumer. The final use of commodities is considered, rather than the intended use. This implies that if a commodity is intended for human consumption but is ultimately used for animal feed, perhaps as a result of spoiling or damage, this is accounted for as animal feed. For comparison, the often-cited study by Gustavsson et al which calculated food losses to be 30%, considered “unplanned” non-food uses as losses (meaning that they will have reached a higher percentage of estimated losses than this paper).

The authors here also argue that more consideration and value should be given to by-products when considering their impacts (for example as livestock convert by-products into food from what might otherwise be waste material).

Losses at every stage in the food system influence the extent to which nutritional requirements of a growing global population can be sustainably met. Inefficiencies and losses in agricultural production and consumer behaviour all play a role. This paper aims to understand better the magnitude of different losses and to provide insights into how these influence overall food system efficiency. We take a systems view from primary production of agricultural biomass through to human food requirements and consumption. Quantities and losses over ten stages are calculated and compared in terms of dry mass, wet mass, protein and energy. The comparison reveals significant differences between these measurements, and the potential for wet mass figures used in previous studies to be misleading. The results suggest that due to cumulative losses, the proportion of global agricultural dry biomass consumed as food is just 6% (9.0% for energy and 7.6% for protein), and 24.8% of harvest biomass (31.9% for energy and 27.8% for protein). The highest rates of loss are associated with livestock production, although the largest absolute losses of biomass occur prior to harvest. Losses of harvested crops were also found to be substantial, with 44.0% of crop dry matter (36.9% of energy and 50.1% of protein) lost prior to human consumption. If human overconsumption, defined as food consumption in excess of nutritional requirements, is included as an additional inefficiency, 48.4% of harvested crops were found to be lost (53.2% of energy and 42.3% of protein). Over-eating was found to be at least as large a contributor to food system losses as consumer food waste. The findings suggest that influencing consumer behaviour, e.g. to eat less animal products, or to reduce per capita consumption closer to nutrient requirements, offer substantial potential to improve food security for the rising global population in a sustainable manner.

You can read more in our research library category Waste and resource use and the keyword categories Production efficiency/intensity, Food waste/surplus food. Note that some of the papers in this collection also considers overconsumption as waste. 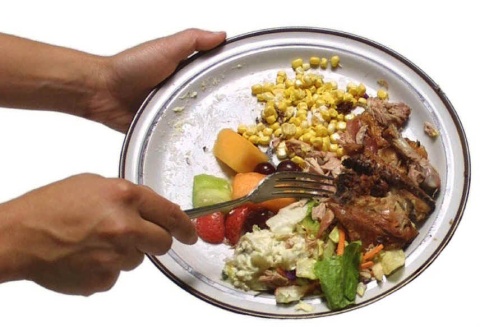