This study, undertaken by researchers at Michigan State University and the Union of Concerned Scientists, compares the net greenhouse gas (GHG) balance of two different beef finishing systems in the Upper Midwest, of the United States: a feedlot system; and a grazing system based on adaptive multi-paddock (AMP) grazing principles.

Note that the AMP approach is one that incorporates short grazing intervals with relatively high animal stocking densities, designed so as to allow plant recovery thereby promoting optimal plant communities and protecting soils.

The aim of the study was to see how these systems compared once any sequestration arising from the AMP grazing management were included in the calculations. The study used a combination of on-farm data and that obtained from the scientific literature. All major sources of GHGs (methane, nitrous oxide, carbon dioxide) were included in the calculations, including those from enteric ruminal fermentation, manure storage and handling, feed production, and on-farm energy use, as well as carbon losses arising from soil erosion during arable feed production. (Note however that any N2O fluxes from the alfalfa pasture itself were not included.) As for carbon removals, data on soil carbon sequestration were based on actual soil sampling of the study sites first in 2012 and then again in 2016. The site area included sandy loam soils (70% of the total), sandy soils, and clay loam soils.

These permanent pastures were established approximately 30 years ago and were continuously grazed and hayed until 2010 when AMP management was initiated. The pastures are mainly sown with alfalfa and have received no fertiliser, irrigation or pesticide amendments.

As to their findings: for the two systems, the study found that GHG emissions excluding sequestration were 6.09 and 9.62 kg CO2-e kg carcass weight (CW), for the feedlot and AMP system cattle, respectively. However, once changes in soil carbon were factored in, the AMP system provided a net sink of -6.65 kg CO2-e / kg CW, with emissions lower still if on farm methane measurements were used rather than those provided by the IPCC. By contrast, emissions from the feedlot system rose slightly to 6.12 kg CO2-e /kg CW because of the additional losses arising from soil erosion. 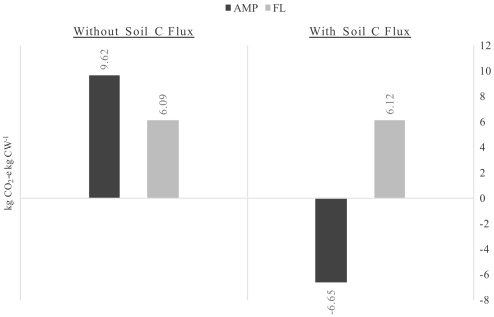 The difference is considerable, due to the very high rate of sequestration found – the authors put this at about 3.59 Mg C/ha/year (N.B. – a Megagramme is a tonne). The authors’ own comments on this high value is worth copying in (lightly edited) full, as follows:

“The high rate of C sequestration observed in our study may be the result of the recent management intervention from continuous grazing to AMP in 2010 (Smith, 2014). However, we are unsure for how long this high rate of C sequestration may continue … we expect that our soils could continue to sequester at this rate for several years. However, because soils that are further from C saturation will accumulate C faster than soils near saturation, and because our estimated soil C sequestration rate is much greater than the 0.41 Mg C ha−1 yr−1 indicated by Conant et al. (2003), we expect continued sequestration, likely to diminish over time... Therefore, we caution about extrapolating the reported rates for an extended period. Continued collection of soil C data and monitoring of AMP grazing systems in the Upper Midwest will shed more light on the ultimate C sequestration and storage potential.

Although we assumed in this study that the croplands used for the FL scenario experience soil erosion rather than carbon sequestration, there is considerable opportunity for sustainability improvements of croplands as well, through different agronomic practices such as leaving crop residues, increased use of perennials or cover crops in rotations, conservation tillage and no-till, and increased use of organic amendments such as compost (Chambers et al., 2016; Minasny et al., 2017). If adopted, these practices may also promote soil C sequestration (Chambers et al., 2016). Nevertheless, studies indicate that in general, well-managed grasslands continue to sequester C at greater rates than improved cropland, and transitions from cropland to grassland show some of the greatest rates of C sequestration, ranging from 0.22 to 8.0 Mg C ha−1 yr−1 …”

As regards the comparative differences between the feedlot and AMP GHG balance the study notes:

“The greater C sequestration and resulting net GHG sink in the AMP grazing system illustrated in this study, compared to continuous grazing systems in other LCAs, calls into question the common assumption that FL intensification reduces the overall GHG footprint through greater productivity. This study shows that when full consideration of land impacts is given to GHG emissions in both FL and AMP grazing-based finishing, environmental benefits may outweigh productivity losses.”

But importantly they also highlight the fact that we have difficult choices to make about how we use our land, and that it is necessary to factor in the consumption side of the equation when thinking about livestock production, whatever the system – as follows:

“Our findings speak to the complexity of addressing beef production systems. Should a society focus on increasing the overall production and efficiency of protein production, limiting land occupation and using greater energy inputs, or produce at a lower rate with less fossil fuel-associated emissions from feed production? Likewise, for the AMP grazing system to produce comparable amounts of beef, either more cows would be needed to produce additional animals for the system, or the cattle would have to remain in the system for a longer period of time. Either scenario would increase the overall emissions and land requirement. Utilization of AMP grazing as a regenerative agriculture management system can improve soil ecological function, lessening damage from tillage and inorganic fertilizers and can improve biodiversity and wildlife habitat ... While not as productive as FL based on yields, the AMP grazing system produced considerably greater amounts of beef on a land basis as compared to continuous grazing, showing that improved management can increase the output of grassfed beef. Ultimately, in a closed system, this implies somewhat lower per capita beef consumption, but greater environmental benefits from what is consumed.”

And elsewhere they write:

“While AMP grazing requires twice as much land than FL, if effectively implemented over a large area, total C sequestration in the Upper Midwest could increase substantially. This does imply less overall beef production in the region, albeit with greater environmental benefits from what is produced.”

Overall this is a really useful study, and it will be interesting to see what future soil sampling measurements bring. As the report authors themselves note, soil carbon sequestration is at its most rapid in the early years of a change in management, and the rate is likely to diminish over time. While of course there will be other advantages too of increasing soil carbon stocks, as a mitigation strategy it is time limited. Over longer time scales – perhaps a period of 20–50 years, the soil carbon balance will likely reach equilibrium, while the direct emissions from the animals will continue. It is also unclear how far this approach will lead to the same results elsewhere, where soils or climates are very different or where it is difficult to establish legumes as part of the pasture mix (see pp 58–60 of the Grazed and Confused? report for a discussion). Other research also shows that in some agro ecological contexts N2O fluxes from legumes can be very high and outweigh any sequestration gains.

The study only looks at the finishing stage since this is where the differences between different systems of production (feedlot, AMP, continuous grazing) are most apparent. The finishing stage accounts for perhaps a third of overall livestock emissions – most arise during the cow-calf stage. Potentially these could also be mitigated via management, but the study did not look at this.

Finally, as the authors themselves hint, we have finite land and various possible ways in which we can use it, all of which will yield a different balance of costs and benefits. Alternative uses for the land may for example, in some contexts include rewilding. A discussion of alternative possible land uses can be found in Chapter Five of the FCRN’s recent Grazed and Confused? report (see in particular 5.4, pp 105 onwards).

And as the authors also indicate, the AMP approach implies (as we conclude in the Grazed and Confused? report) an overall need to eat less meat. The UK’s Eating Better Alliance makes the case for ‘less and better’ meat consumption – see here for more. The FAO has also recently released a briefing paper on how to reduce emissions from livestock (including, somewhat unusually for the FAO, the suggestion that emissions could be reduced through reducing demand for meat). 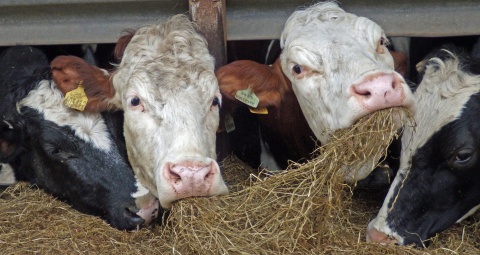