How well do plant based alternatives fare nutritionally compared to cow’s milk?

A new paper compares four popular plant based milks to cow’s milk. It concludes that soy milk is the best replacement for cow’s milk from a nutritional standpoint.

Nutritional data was compiled from the packaging of commercial products and cross-referenced with data from the USDA website. Carbohydrates, proteins, fats and several vitamins and minerals are reported for dairy milk and for each of the four plant milks. The paper does not state whether whole, semi-skimmed or skimmed dairy milk was considered, but the reported fat content appears to be close to that of whole milk (based on USDA figures).

Since the paper does not include a table or figure which compares all five milks, we have produced the figure below which compares the main nutrients considered in the discussion section of the paper (carbohydrate, protein, fat, calcium and energy) for the plant milks and dairy milk. Figures are given as a percentage of the dairy values on the basis of weight of nutrient per unit volume of milk (or calories per unit volume, in the case of energy). For the full list of nutrients considered, see the full paper. 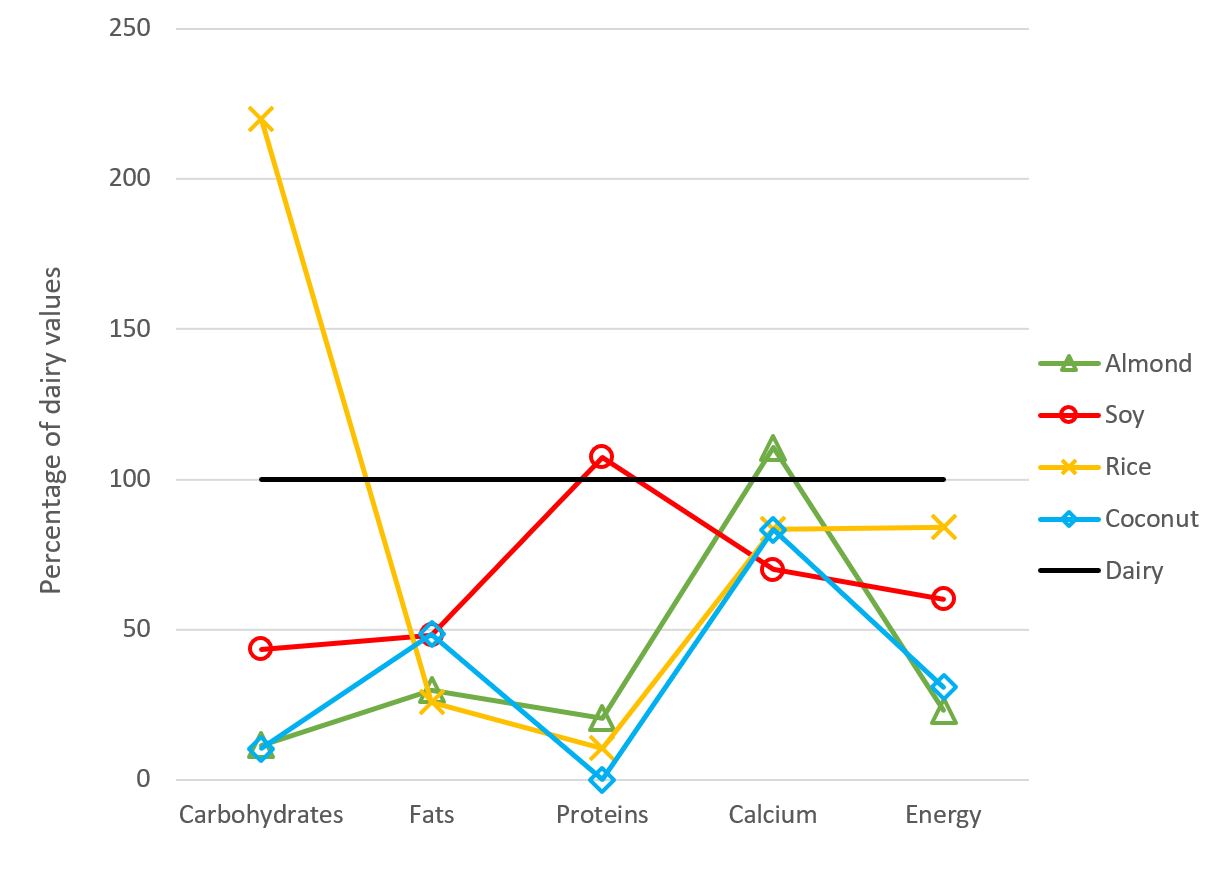 The authors note that in dairy milk, the three main macronutrients are fairly balanced, with 29% of the energy coming from carbohydrates, 46% from fat and 21% from protein. The authors rule out rice and coconut milks as good replacements for dairy milk because of their relatively unbalanced nutritional profile: rice milk is high in carbohydrate but does not provide much fat or protein, whereas coconut milk provides no protein, little carbohydrate and some fat. Almond milk, while having a balanced nutritional profile, contains lower levels of carbohydrates, fats and proteins per unit volume than soy or dairy milk. This leaves soy milk as the best replacement for dairy milk. Only soy milk provides a similar level of protein to dairy milk, per unit volume of milk.

The authors point out that most of the fat in coconut milk is saturated, which has been associated with cardiovascular issues. Note, however, that the weight of saturated fat per unit volume of milk is actually higher in dairy milk than in coconut milk. The fats in almond and soy milk, in contrast, are largely unsaturated, which has been associated with health benefits. None of the plant milks contain cholesterol, which could contribute to demand for plant milks.

All of the plant milks have a lower calorie content than dairy milk, which can be perceived as a benefit by some consumers.

The authors propose measuring how good a calcium source is on the basis of weight of calcium per calorie of energy provided, which would make dairy milk (at 1.9 mg of calcium per kcal) a better source than whole almonds (0.46 mg/kcal) or whole soybeans (0.62 mg/kcal). However, as the figure above shows, all of the plant milks contain similar average levels of calcium to dairy milk in terms of weight of calcium per unit volume of milk. There is actually a wide range in calcium content because some brands are fortified with calcium and others are not. The authors point out that more research is required into the health effects of added calcium.

The authors conclude that soy milk is the best replacement for cow’s milk from a nutritional standpoint because of its relatively balanced nutritional profile and high protein content, but that there are issues such as the often ‘beany’ flavour which some people do not like. Rice or coconut milk may still be good choices for people with soy or almond allergies, while almond milk has a taste advantage.

Due to the issues like lactose intolerance and milk allergy arising from the consumption of cow’s milk, there has been an increased demand in the plant based alternative milks around the world. Food industry has addressed these demands by introducing various milk beverages which are promoted as alternatives coming from plant sources which include almond milk and soy milk. Though they are popularly advertised as healthy and wholesome, little research has been done in understanding the nutritional implications of consuming these milk beverages in short term and long term. Further, consumers associate these alternatives to be a direct substitute of cow’s milk which might not be true in all cases. This review tries to address the issue by outlining the differences between cow’s milk and commercially available alternative milks in terms of their nutrient content. Though various plant based alternate milks have been studied, only the four most consumed milk beverages are presented in this review which are consumed widely around the world. A complete nutritional outline and the corresponding health benefits of consuming these plant based milk beverages have been discussed in detail which could help the consumers make an informed decision.

Access the full article here. See also the Foodsource chapter What is the connection between food & health? 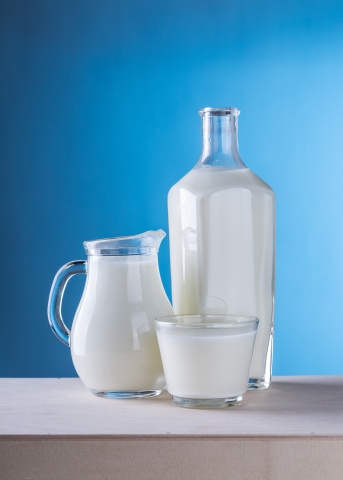