This paper looks at link between diets, health and climate and particularly the effects of adopting healthier diets in the US on the risk of disease, health care costs and greenhouse gas emissions.

The study examined the potential to mitigate climate change through the food system and the health care system. It models combined effects on the food and health care systems of dietary changes that include three scenarios of healthy alternative diets (HADs). HAD-1 reflected the US dietary recommendations (processed meat limited to 20% of total red meat) and HAD-2 included no processed meat and reduced overall red meat intake to 25 g of cooked meat a day. HAD-3 had neither processed nor red meat. The three scenario-diets were higher in intake of plant based protein (beans and peas).

According to the paper, the different HAD scenarios could lead to:

For the health care system, the researchers estimated the change in risk of diabetes, colorectal cancer and coronary heart disease due to the healthier diets and the subsequent effect on both health care costs and associated greenhouse gas emissions.

For GHGE associated with the food system the authors used LCA data from the literature and included inputs to production (incl. feed and pasture for animal) through to retail in the analysis. Within these boundaries food waste was also included. The study did not however analyse food waste at household level, emissions related to land-use change, or retail to consumer transport or storage and preparation at the consumer stage.

In analysing the health impacts and associated potential reductions in GHGEs and costs, the paper identified foods linked to change in relative risk (RR) for the three non-communicable diseases (NCDs) and created the alternative diets scenarios (HADs) by adjusting about half of the sources of calories in the 2,000-calorie-a-day Standard American Diet (SAD). They did however not change the calories coming from added sugar. The authors then estimated the changes in disease prevalence based on evidence from meta-analyses which then informed their analysis of potential health cost reductions. For the most ambitious dietary scenario (HAD-3 with no red or processed meat) there was a saving of $95 billion out of the total annual cost of $230 billion for the three diseases.

In addition, the paper shows that the reduction in health care costs with reduction in NCDs could also directly reduce GHGE and their conclusion is that healthier eating habits can contribute to large reductions in disease and GHGE in the food system, and that reduction of animal foods, especially red and processed meat, is key. It is also concluded that dietary change is a relatively cheap climate change mitigation option requiring comparatively little investment in new research, technology or infrastructure and that there are clear co-benefits for health of adjusting diets to be more sustainable. They mention however the substantial challenges associated with trying to change economic, social and cultural structures at both individual and policy level

The paper looked at the potential of dietary change but did not investigate options for reducing rebound effects (whereby savings from mitigation policy are cancelled out by increases in investments in other carbon-intensive activities or increases in carbon intensive behaviours), and they acknowledge that this limits the significance of the results. They make the following point:

“We were not able to estimate the extent of rebound from health care cost savings in terms of the GHGE generated by spending the savings. However, rebound exceeding 100% may be likely because the GHGE intensity of health care dollars is half of that of the rest of the US economy.”.

The standard US diet contributes to greenhouse gas emissions (GHGE) from both the food system, and from the health system through its contribution to non-communicable diseases. To estimate the potential for diet change to reduce GHGE and improve public health, we analyzed the effect of adopting healthier model diets in the USA on the risk of disease, health care costs, and GHGE. We found that adoption of healthier diets reduced the relative risk of coronary heart disease, colorectal cancer, and type 2 diabetes by 20–45%, US health care costs by US$B 77–93 per year, and direct GHGE by 222–826 kg CO2e capita−1 year−1(69–84 kg from the health care system, 153–742 kg from the food system). Emission reductions were equivalent to 6–23% of the US Climate Action Plan’s target of a 17% reduction in 2005 GHGE by 2020, and 24–134% of California’s target of 1990 GHGE levels by 2020. However, there is potential for investment of health care savings to result in rebound up to and greater than 100%, which would increase net GHGE. Given the urgency of improving public health and of mitigating GHGE over the short term, the potential contribution of diet change, and the options for reducing rebound, deserve more research in support of policy.

Read the full paper here (requires journal access). For a press release see here and for an article from Food navigator see here.

You may also be interested in our summary of this 2015 paper, which comes to to a somewhat different conclusion, together with a commentary by one of the authors of that paper, and additional analysis by Prof. Michael Hamm. 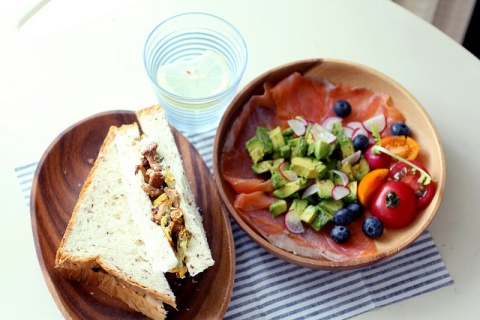