Global trends in antimicrobial use in food animals

This paper estimates that global use of antimicrobial drugs in animal farming is anticipated to rise by 67% by 2030, due to increasing demand for animal products and a shift towards more large scale intensive systems of production. It argues that a range of measures need to be taken in order to address the negative impacts of this growth.

A more succinct ‘significance’ summary provided by the paper is as follows:

Antimicrobials are used in livestock production to maintain health and productivity. These practices contribute to the spread of drug-resistant pathogens in both livestock and humans, posing a significant public health threat. We present the first global map (228 countries) of antibiotic consumption in livestock and conservatively estimate the total consumption in 2010 at 63,151 tons. We project that antimicrobial consumption will rise by 67% by 2030, and nearly double in Brazil, Russia, India, China, and South Africa. This rise is likely to be driven by the growth in consumer demand for livestock products in middle-income countries and a shift to large-scale farms where antimicrobials are used routinely. Our findings call for initiatives to preserve antibiotic effectiveness while simultaneously ensuring food security in low- and lower-middle-income countries.

The study concludes by calling for “urgent and concerted action in all countries, which is needed to limit the overuse and abuse of antimicrobials in food animal production. These actions should include (i) implementation of a publicly funded international surveillance network of antimicrobial consumption in food animals in countries undergoing rapid intensification in the livestock sector, (ii) collaboration with veterinary drug manufacturers and animal feed producers to cross-validate estimates of consumption with sales data, (iii) implementation of an international agenda to harmonize regulatory frameworks among countries, and (iv) the ultimate phasing out of antimicrobial use for growth promotion, based on the successful experience in the European Union and the new biological (48, 49) and economic (50, 51) evidence challenging the purported benefits of antimicrobial use in food animal production.”

The paper can be accessed here (you will need journal access) 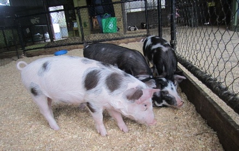