Fourth national climate assessment for the US

The US Global Change Research Programme has published the second volume of its Fourth National Climate Assessment, which examines the human welfare, societal, and environmental impacts of climate change and variability across many sectors, including agriculture.

Regarding agriculture and food production, the report concludes that - although some areas may see improved crop productivity - yields of major US crops, livestock health, food prices and rural livelihoods are at risk from rising temperatures, extreme heat, drought, wildfire on rangelands and heavy downpours. The report suggests that adaptation strategies could include producing different agricultural products and adopting new technologies and management strategies, but notes that their effectiveness is limited if climate change has severe impacts, and that they require sufficient investment.

Other topics covered by the report include communities, the economy, interconnected impacts, actions to reduce risks, water, health, indigenous peoples, ecosystems and services, infrastructure, ocean and coasts, and tourism and recreation.

When questioned by the press about the report, US President Trump responded, “I don’t believe it” (source), while White House Press Secretary Sarah Huckabee Sanders said the report is "not based on facts" but based on "the most extreme modeled scenario, which contradicts long established trends” (source).

When the President was questioned further about his scepticism of the report by the Washington Post (source), he responded, “One of the problems that a lot of people like myself — we have very high levels of intelligence, but we’re not necessarily such believers. You look at our air and our water, and it’s right now at a record clean.” The President’s comment appears to conflate air and water pollution with the separate issue of climate change.

One of the report’s authors, Katharine Hayhoe, responded to these comments in a Twitter thread - see selected tweets below.

The Fourth US National Climate Assessment was released on Friday. Since then, a number of politicians + pundits have made statements about it that are not accurate. As an author, I'm here to set the record straight. Here we go! (thread) https://t.co/4qV9ss3Tr3

First, a WH spokesperson said the report was based on the “most extreme” scenario. No: the report considered a very broad range of scenarios, from one where carbon emissions go negative to one where they continue to grow. Source: https://t.co/ibXllAEsxR pic.twitter.com/k6XoeNwGFr 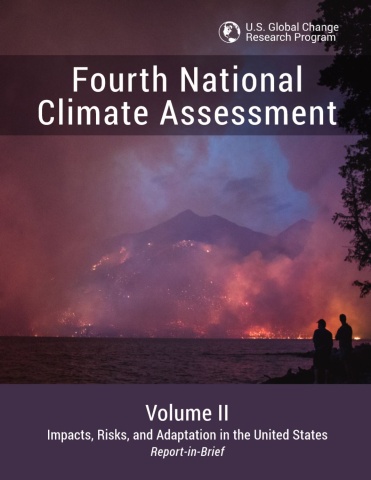