Feed conversion efficiency in aquaculture: do we measure it correctly?

Fish are generally seen as more efficient in converting feed into food than land-based species, but, according to a new paper, this conclusion does not hold if the retention of protein and calories is accounted for using a different measure.

Aquaculture is the farming of seafood. Some systems require the input of feed, while others don’t need feed (for example, filter-feeders such as oysters and plants such as seaweed). 70% of global aquaculture (excluding aquatic plants) uses commercial compound feed, which can be made from wild-caught fish, land-based crops (including soy, grains and groundnuts) and land-based animal byproducts.

Feed conversion ratio (FCR) is the conventional measure of livestock production efficiency: the weight of feed intake divided by weight gained by the animal. Lower FCR values indicate higher efficiency. FCRs are typically 6.0–10.0 for beef, 2.7–5.0 for pigs, 1.7–2.0 for chicken and 1.0–2.4 for farmed fish and shrimp. Aquatic animals have fairly low FCRs compared to land animals because they are buoyant and tend to be cold-blooded, saving energy.

FCR has limitations as a measure of efficiency: it doesn’t account for the nutritional composition of the feed, how much of the animal can actually be eaten or the nutritional quality of the edible portion. Since these all vary across species, FCR might not be a valid measurement for comparing the performance of different livestock species.

The authors of this paper reviewed the literature to identify alternative measures of aquatic animal production efficiency. They selected ‘protein retention’ and ‘calorie retention’ as being more precise measures of how efficiently animals convert feed nutrients into human-edible nutrients. This paper aims to fill a gap in existing literature by calculating these values for nine aquaculture species. Literature values for beef cattle, pigs, chickens, eggs and dairy are also considered, and the values are recalculated for beef cattle, pigs and chickens.

Protein retention is defined as:

where ‘edible portion’ refers to the fraction by weight of the animal which can be eaten by humans. Similarly, calorie retention is defined as:

When using FCR to assess efficiency, aquaculture appears to have similar efficiency to chickens and higher efficiency than other land animals (see Fig. 1 below). However, a different story emerges when using protein and calorie retention (see Fig. 2 below). The calorie retention for most of the aquatic species considered (and the weighted average for aquaculture) is nearer to the less efficient beef than the more efficient chicken. Likewise, the protein retention of most of the aquatic species (and the weighted aquaculture average) is nearer to pigs and beef, and considerably below that of chicken. 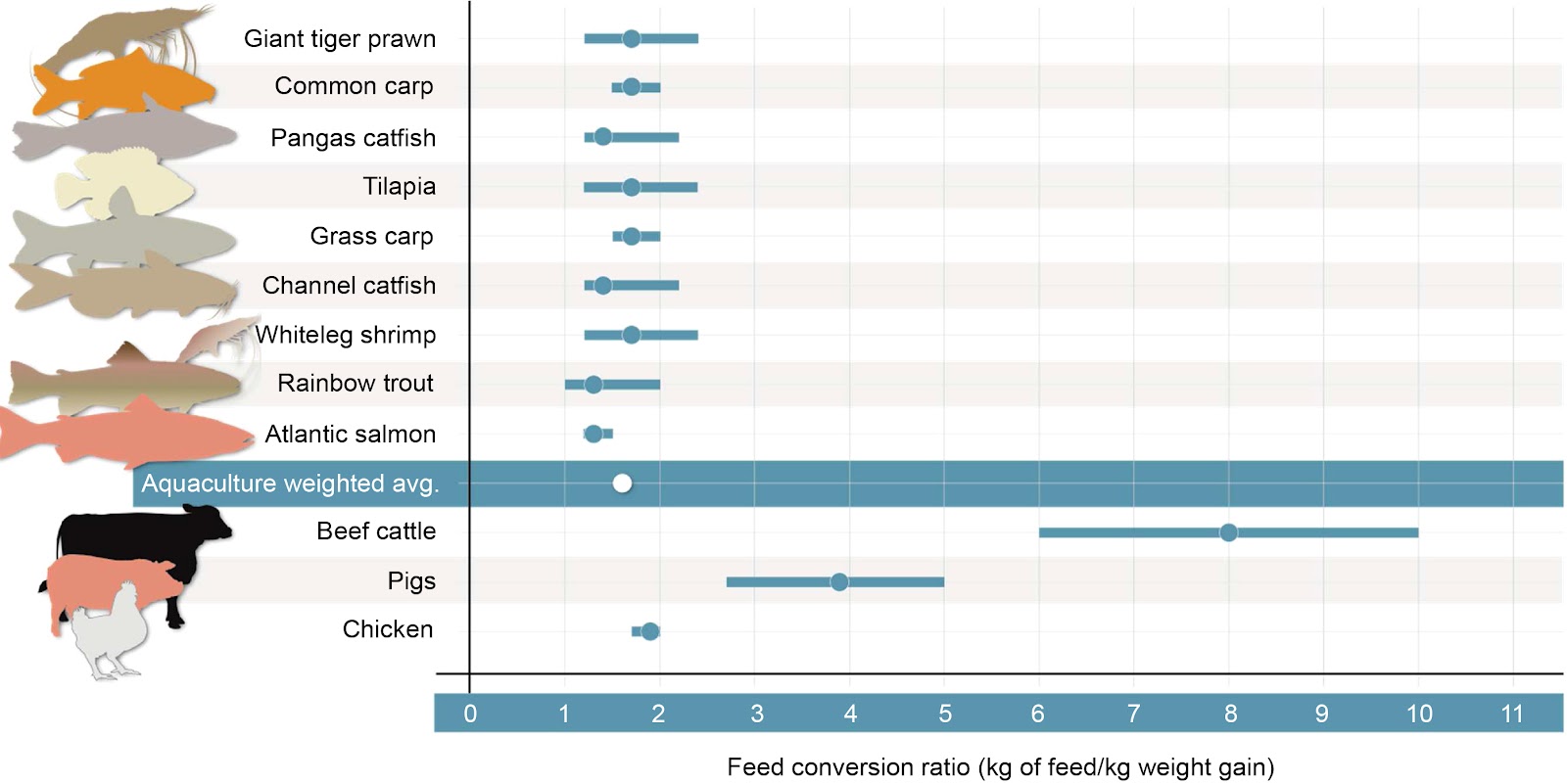 There are several factors driving these differences.

A limitation of protein and calorie retention is that they don’t account for whether the feed contains protein or calories that are edible to humans. They therefore don’t differentiate between aquaculture that reduces the amount of human-edible food in the supply chain, and aquaculture that increases the amount of food available to humans. For further information on this topic, see this paper: Livestock: On our plates or eating at our table?

This paper suggests that relying on FCRs leads to the conclusion that aquaculture is more efficient than land-based aquaculture, which does not hold if protein and calorie retention are considered instead. Nevertheless, the authors do not recommend replacing FCRs with protein and calorie retention, but instead call for using multiple measures of efficiency when comparing different food sources.

Update, Nov 2022: A correction to this paper has been published here: Corrigendum: Feed conversion efficiency in aquaculture: do we measure it correctly?

Globally, demand for food animal products is rising. At the same time, we face mounting, related pressures including limited natural resources, negative environmental externalities, climate disruption, and population growth. Governments and other stakeholders are seeking strategies to boost food production efficiency and food system resiliency, and aquaculture (farmed seafood) is commonly viewed as having a major role in improving global food security based on longstanding measures of animal production efficiency. The most widely used measurement is called the 'feed conversion ratio' (FCR), which is the weight of feed administered over the lifetime of an animal divided by weight gained. By this measure, fed aquaculture and chickens are similarly efficient at converting feed into animal biomass, and both are more efficient compared to pigs and cattle. FCR does not account for differences in feed content, edible portion of an animal, or nutritional quality of the final product. Given these limitations, we searched the literature for alternative efficiency measures and identified 'nutrient retention', which can be used to compare protein and calories in feed (inputs) and edible portions of animals (outputs). Protein and calorie retention have not been calculated for most aquaculture species. Focusing on commercial production, we collected data on feed composition, feed conversion ratios, edible portions (i.e. yield), and nutritional content of edible flesh for nine aquatic and three terrestrial farmed animal species. We estimate that 19% of protein and 10% of calories in feed for aquatic species are ultimately made available in the human food supply, with significant variation between species. Comparing all terrestrial and aquatic animals in the study, chickens are most efficient using these measures, followed by Atlantic salmon. Despite lower FCRs in aquaculture, protein and calorie retention for aquaculture production is comparable to livestock production. This is, in part, due to farmed fish and shrimp requiring higher levels of protein and calories in feed compared to chickens, pigs, and cattle. Strategies to address global food security should consider these alternative efficiency measures.

Read the full article here. See also the Foodsource resource How far could changes in production practices reduce GHG emissions? and the FCRN paper Lean, green, mean, obscene…? What is efficiency? And is it sustainable? 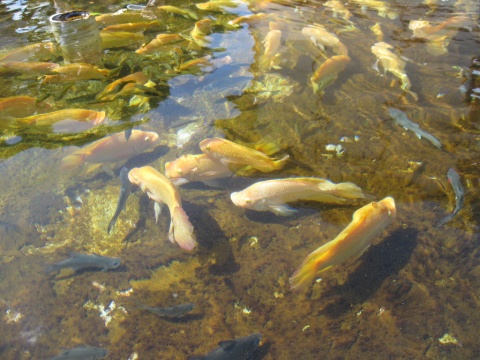