Farmagaddeon describes the effects of livestock intensification (“factory farming”) around the world. It makes the case against industrialised agriculture arguing that it affects not only the welfare of farmed animals but also increasingly our countryside, health and the quality of our food all around the world.

* Our health is under threat: half of all antibiotics used worldwide (rising to 80 per cent in US) are routinely given to industrially farmed animals, contributing to the emergence of deadly antibiotic-resistant superbugs

* Wildlife is being systematically destroyed: bees are now trucked across the States (and even airfreighted from Australia) to pollinate the fruit trees in the vast orchards of California, where a chemical assault has decimated the wild insect population

* Fresh fish are being hoovered from the oceans: fish that could feed local populations are being turned into fishmeal for farmed fish, chickens and pigs thousands of miles away

* Cereals that could feed billions of people are being given to animals: soya and grain that could nourish the world’s poorest, are now grown increasingly as animal fodder

The book is written by Philip Lymbery, head of Compassion in World Farming (CIWF), a UK organisation dedicated to the welfare of farm animals and Sunday Times journalist, Isabel Oakeshott.  It covers areas such as the crisis of antibiotics and resistant superbugs, the destruction of wildlife and the decimation of the bee population, the hoovering of fish from the oceans and the epidemic waste that underpins the mega-farming model.

You can read more about the book here or on Lymbery's own website here. Philip is interviewed by Eating Better in this blog-post, where he describes what motivated him to write this book.

You can read a book review in the Guardian here and in the London Evening Standard here. 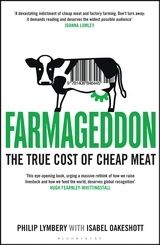