The consumption of milk is regarded as a classic example of gene-culture evolution. Archaeologists and geneticists have been puzzling about where and why people have been drinking milk since it was revealed that the mutations which enable adults to drink milk are under the strongest selection of any in the human genome. Co-author Dr Christina Warinner, from the Department of Anthropology, University of Oklahoma, said: "The study has far-reaching implications for understanding the relationship between human diet and evolution.

Dairy products are a very recent, post-Neolithic dietary innovation, and most of the world's population is unable to digest lactose, often developing the symptoms of lactose intolerance." The researchers also note that this study makes it possible for the first time to link milk consumption to specific skeletons, and figure out who has access to this important nutritional resource. The new research provides direct protein evidence that cattle, sheep, and goat whey has been consumed by human populations for at least 5,000 years in some European sites.

Milk is a major food of global economic importance, and its consumption is regarded as a classic example of gene-culture evolution. Humans have exploited animal milk as a food resource for at least 8500 years, but the origins, spread, and scale of dairying remain poorly understood. Indirect lines of evidence, such as lipid isotopic ratios of pottery residues, faunal mortality profiles, and lactase persistence allele frequencies, provide a partial picture of this process; however, in order to understand how, where, and when humans consumed milk products, it is necessary to link evidence of consumption directly to individuals and their dairy livestock. Here we report the first direct evidence of milk consumption, the whey protein β-lactoglobulin (BLG), preserved in human dental calculus from the Bronze Age (ca. 3000 BCE) to the present day. Using protein tandem mass spectrometry, we demonstrate that BLG is a species-specific biomarker of dairy consumption, and we identify individuals consuming cattle, sheep, and goat milk products in the archaeological record. We then apply this method to human dental calculus from Greenland's medieval Norse colonies, and report a decline of this biomarker leading up to the abandonment of the Norse Greenland colonies in the 15th century CE. 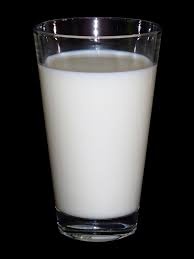