A call for divestment from Big Livestock

This report from UK food waste organisation Feedback makes a case for the end of industrial animal agriculture and calls for divestment from large livestock companies, arguing that the business model of “Big Livestock” is incompatible with reducing greenhouse gas emissions.

The report addresses the questions of whether these large livestock corporations can reduce their emissions, offset their emissions or else stop producing meat and dairy. It argues that increases in efficiency (i.e. emissions per unit of output) often come with tradeoffs (such as lower animal welfare) and are likely to be cancelled out by the growth ambitions of the companies.

Regarding offsetting, it notes that relying on low-cost carbon offsets such as afforestation would add to the large areas of land already used by livestock; furthermore, the uncertain future of carbon markets adds risk to “Big Livestock’s” business model if it relies on offsetting.

While one quarter of the top 60 livestock producers have engaged with alternative proteins (such as plant-based foods), the report points out that some meat and dairy executives have stated they see alternative proteins as an additional market rather than a replacement for animal products, and that many livestock companies are pushing for growth in their meat and dairy output even as they also market plant-based products. 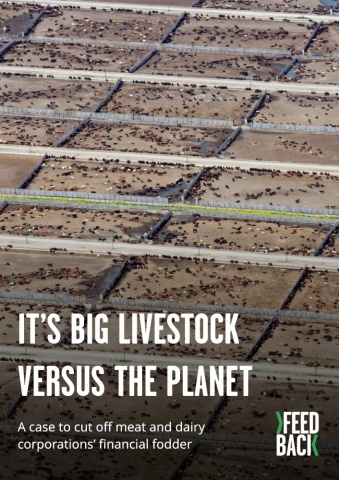