The planetary boundaries concept provides a theoretical upper limit on human activity which the planet is able to sustain without major perturbation to the current ‘Earth system’. Previously, nine planetary boundaries (PBs) have been proposed and recently Steffen et al. (2015) have updated these boundary definitions and assessed the current state of the position of human activity with respect to each boundary. In this article, researchers from a number of food, climate change, agricultural and environmental research institutions around the world build on this work by assessing the impact of agriculture on each PB status, based on a detailed literature review of the available research.

Their findings are summarised below (by PB):

Throughout the article the authors comment on the regional aspects of each planetary boundary providing an interesting perspective on the use of ‘lumped’ global parameters in assessing the health of the current Earth system. Additionally the authors provide a number of potential amelioration mechanisms for each of these nine planetary boundaries - please refer to the full article for an extensive discussion.

We explore the role of agriculture in destabilizing the Earth system at the planetary scale, through examining nine planetary boundaries, or “safe limits”: land-system change, freshwater use, biogeochemical flows, biosphere integrity, climate change, ocean acidification, stratospheric ozone depletion, atmospheric aerosol loading, and introduction of novel entities. Two planetary boundaries have been fully transgressed, i.e., are at high risk, biosphere integrity and biogeochemical flows, and agriculture has been the major driver of the transgression. Three are in a zone of uncertainty i.e., at increasing risk, with agriculture the major driver of two of those, land-system change and freshwater use, and a significant contributor to the third, climate change. Agriculture is also a significant or major contributor to change for many of those planetary boundaries still in the safe zone. To reduce the role of agriculture in transgressing planetary boundaries, many interventions will be needed, including those in broader food systems.

You can read the full article here. 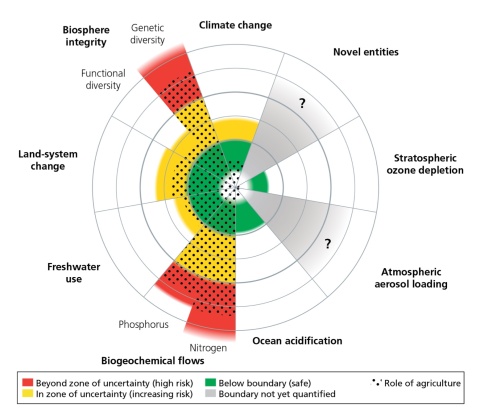