Affordability of the EAT-Lancet reference diet

According to this study, the diet recommended by the EAT-Lancet commission on grounds of health and sustainability is too expensive for around 1.6 billion people, mostly in sub-Saharan Africa and south Asia. The study is based on food prices and household incomes in 159 countries.

Image: Dietary composition (fraction of total kcal) of EAT-Lancet diet and the cheapest nutritionally adequate diet. Figure produced by the FCRN; data from p25 of the Appendix (PDF link) to Hirvonen et al.

Since people must spend money on things other than food (such as housing, transport and healthcare), the paper points out that in reality, more than 1.6 billion people would be unable to afford the EAT-Lancet diet. The paper calls for measures to alleviate constraints to accessing healthy, sustainable food, both in terms of food prices and in terms of income.

The paper does not say how many people are currently unable to afford even the cheapest nutritionally adequate diet, but it notes that over 2 billion people worldwide are estimated to have at least one chronic micronutrient deficiency - see the Foodsource building block What is malnutrition? for more details.

The EAT–Lancet Commission drew on all available nutritional and environmental evidence to construct the first global benchmark diet capable of sustaining health and protecting the planet, but it did not assess dietary affordability. We used food price and household income data to estimate affordability of EAT–Lancet benchmark diets, as a first step to guiding interventions to improve diets around the world.

We obtained retail prices from 2011 for 744 foods in 159 countries, collected under the International Comparison Program. We used these data to identify the most affordable foods to meet EAT–Lancet targets. We compared total diet cost per day to each country's mean per capita household income, calculated the proportion of people for whom the most affordable EAT–Lancet diet exceeds total income, and also measured affordability relative to a least-cost diet that meets essential nutrient requirements.

The most affordable EAT–Lancet diets cost a global median of US$2·84 per day (IQR 2·41–3·16) in 2011, of which the largest share was the cost of fruits and vegetables (31·2%), followed by legumes and nuts (18·7%), meat, eggs, and fish (15·2%), and dairy (13·2%). This diet costs a small fraction of average incomes in high-income countries but is not affordable for the world's poor. We estimated that the cost of an EAT–Lancet diet exceeded household per capita income for at least 1·58 billion people. The EAT–Lancet diet is also more expensive than the minimum cost of nutrient adequacy, on average, by a mean factor of 1·60 (IQR 1·41–1·78).

Current diets differ greatly from EAT–Lancet targets. Improving diets is affordable in many countries but for many people would require some combination of higher income, nutritional assistance, and lower prices. Data and analysis for the cost of healthier foods are needed to inform both local interventions and systemic changes.

Read the full paper here and read a press release here. See also the Foodsource resource What are the possible unintended consequences of changing diets? 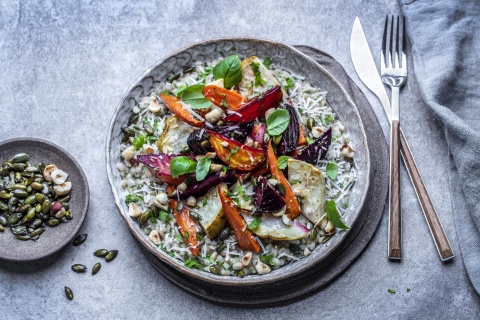