Virtual Book Launch - The Politics of Food Provisioning in Colombia: Agrarian Movements and Negotiations with the State 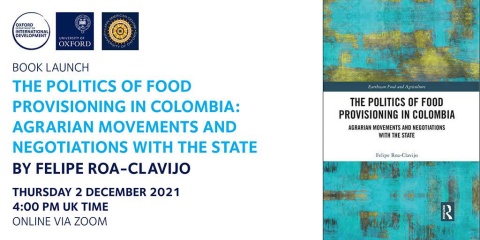 This virtual event will launch Felipe Roa-Clavijo’s first book, “The Politics of Food Provisioning in Colombia. Agrarian Movements and Negotiations with the State”, published by Routledge.

The event will feature Felipe Roa-Clavijo and two discussants who will provide comments and insights on the book’s relevance and contributions to the debates on food systems and development in Colombia and Latin America. A Q&A session and interactive dialogue will follow the discussants’ comments.

About the book
The book uncovers the conflicts and politics of food provisioning: who produces what and where, and with what socio-economic effects. This analytical lens is used to explain the re-emergence of national agrarian movements, the ways they contest dominant development narratives, and their relevance in discussions about food sovereignty.

Roa-Clavijo’s analysis incorporates a wide range of voices throughout Colombia from high-level government representatives to leaders from national agrarian movements. Key findings show an underlying conflict within food provisioning based on the struggle of marginalized smallholders to develop alternative agri-food systems that can be included in local and domestic food markets in the context of a state dominated by an export and import approach.

The book argues for a new approach with the potential to reframe the debate about the future of food and agriculture in Colombia and beyond.