This article by researchers at the International Food Policy Research Institute, Washington DC examines four pervasive myths about women in agriculture: 1) 70% of the world’s poor are women; 2) Women produce 60 to 80% of the world’s food; 3) Women own 1% of the world’s land; and 4) Women are better stewards of the environment. For each myth, the authors examine the relevant literature to evaluate any truth behind it and to identify its underpinning assumptions and fallacies.

The authors argue that these myths perpetuate the stereotype of women as either victims or saviours, and ignore the individuality of women and the contributions of men, communities and institutions to food security. They also argue that the existence of these myths is misleading about the conceptual soundness and accuracy of data on gender dynamics in food security, which may dampen efforts to improve such data collection.

Myth 1: 70% of the world’s poor are women
While the authors acknowledge that women are without doubt on average disadvantaged in comparison to men, they argue that the 70% figure often cited does not stand up to scrutiny. They explain that calculating wealth is complicated by how wealth is actually defined (i.e. the balance of cash flow and assets for example), as well as by whether data is collected at the level of individuals or households.  Much of the myth, they claim, originates from the fact that a higher proportion of women-headed households (which also tend to have more women in them than male-headed households) are below the poverty line in terms of income, but as there are comparatively very few women-headed households in the world, far more women live in male-headed households, so this information does not enable an accurate assessment of women in poverty. The authors also point out that the 70% figure would imply that only 30% of the world’s poor are men or children, which vastly underestimates the number of children in poverty, and simply doesn’t add up. The reason that this myth is harmful, according to the authors, is that it not only casts women as victims rather than contributors to food security, and ignores the heterogeneity of women’s situations, but also potentially distorts the design and implementation of programs and policies to alleviate poverty.

The authors advocate for proper gendered analyses of poverty to be based on data pertaining to individuals, not households; that measures of well-being should not be limited to monetary ones, but should include non-monetary measures, such as power, nutrition, health, education, mortality rates, employment etc.; and finally that designing and implementing effective programs to improve food security of the poor should be based on measurement and identification of areas where deprivation is highest, irrespective of gender.

Myth 2: Women produce 60-80% of the food
In evaluating this myth, the authors note the practical infeasibility of women simultaneously having less access to land, capital and other resources than men, bearing the brunt of responsibility for household work and childcare, and producing most of the world’s food, especially in light of women comprising significantly less than half of the agricultural labour force worldwide (although the authors note that this data may underestimate women’s involvement). They outline the difficulties in accurately apportioning food production between the sexes and question why it is even useful to do this - they ask: “Even if we knew how much of the world’s food was produced by women, how would that inform policy?”. The truth behind the myth, which the authors outline and describe in some detail, is that women make essential contributions to food security, often in “invisible” ways (i.e. through unpaid labour, labouring in kitchen gardens, tending small livestock, cooking in the home, etc.). The authors argue that instead of “trying to identify women’s independent contributions to agriculture, we need to recognise that agriculture is important for rural women, strengthen women’s access to the resources needed for productive agriculture, and reduce the time and energy burdens of household work”.

Myth 3: Women own 1-2% of the land
The authors recognise that the truth embodied in this myth is that legal systems, inheritance systems and patriarchal gender norms limit women’s access to and retention of land that they can farm. But they argue that presenting this information as a simple statistic about land ownership masks the complexity of land tenure systems, joint ownership arrangements and even the definition of ownership. Farmers need secure tenure of the land that they farm, the authors assert, and women are often more vulnerable to loss of this tenure than men. The authors advocate for increased protection in both land and family law of women’s rights (they discuss in some details the uncertainty over whether formalising land rights would strengthen or weaken women’s positions), and for women’s knowledge of their own rights - and subsequent ability to be able to fight for them - to be increased through education, such as legal literacy programs.

Myth 4: Women are intrinsically better stewards of the environment
This myth is, according to the authors, based largely on the fact that in traditional gender roles, women may be more directly affected by resource limitation, have more incentives to therefore preserve resources, and also often possess specialised knowledge of natural resources such as medicinal plants and landraces of crops. They acknowledge the importance of this myth in drawing attention to this knowledge which is often otherwise overlooked. The problems with this myth that the authors identify, however, are that: 1) the empirical evidence on the link between women and stewardship is very mixed, with some studies finding positive correlations between female contributions to forestry projects and the sustainability of such projects, and yet others finding that female-dominated groups were less likely to adopt new technologies and resource monitoring policies that improve sustainability; 2) that they myth treats women as a homogenous group and assumes some sort of inherent conservation drive within women that probably doesn’t exist; and 3) that it can lead to programmes intended to improve sustainability being targeted at women in such a way as to simply increase their workload, when targeting the programmes at mixed groups has been shown to be more effective. The authors argue that women’s specialised knowledge shouldn’t be ignored, but should be seen as complementary and synergistic with that of men - the onus for conservation should not be placed entirely on women, but rather they (along with men) should be recognised as individuals in the contributions that they are able to make, and should be empowered (e.g. through greater land tenure, access to information, and equal voice and leadership within resource management groups) to manage land and resources more sustainably.

In conclusion, the authors reiterate the importance of separating effective program design from reliance on myths which perpetuate the notion of women as either victims or as independent saviours who already have everything they need to solve conservation and sustainability problems. They welcome the widespread belief in the importance of gender issues in food security that the persistence of these myths indicates, but maintain that better, bigger sex-disaggregated data and in particular a stronger recognition of gender relations, the roles of men and the importance of families, communities and institutions, are all of paramount importance to properly addressing the issues of sustainability and conservation in agriculture.

Sustainable Development Goal 5 (SDG) on gender equality and women’s rights and at least 11 of the 17 SDGs require indicators related to gender dynamics. Despite the need for reliable indicators, stylized facts on women, agriculture, and the environment persist. This paper analyzes four gender myths: 1) 70% of the world’s poor are women; 2) Women produce 60 to 80% of the world’s food; 3) Women own 1% of the world’s land; and 4) Women are better stewards of the environment. After reviewing the conceptual and empirical literature, the paper presents the kernel of truth underlying each myth, questions its underlying assumptions and implications, and examines how it hinders us from developing effective food security policies. 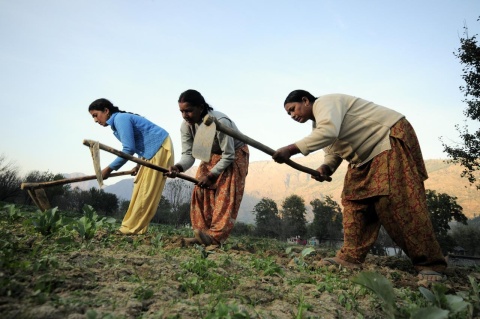