The common weed killer glyphosate targets an enzyme only found in plants and microorganisms. However, a new paper finds that glyphosate can harm honey bees even though they lack the targeted enzyme. Glyphosate does this by changing the balance of microorganisms (some of which contain the relevant enzyme) found in the bees’ guts, making the bees more susceptible to infections.

Glyphosate, the primary herbicide used globally for weed control, targets the 5-enolpyruvylshikimate-3-phosphate synthase (EPSPS) enzyme in the shikimate pathway found in plants and some microorganisms. Thus, glyphosate may affect bacterial symbionts of animals living near agricultural sites, including pollinators such as bees. The honey bee gut microbiota is dominated by eight bacterial species that promote weight gain and reduce pathogen susceptibility. The gene encoding EPSPS is present in almost all sequenced genomes of bee gut bacteria, indicating that they are potentially susceptible to glyphosate. We demonstrated that the relative and absolute abundances of dominant gut microbiota species are decreased in bees exposed to glyphosate at concentrations documented in the environment. Glyphosate exposure of young workers increased mortality of bees subsequently exposed to the opportunistic pathogen Serratia marcescens. Members of the bee gut microbiota varied in susceptibility to glyphosate, largely corresponding to whether they possessed an EPSPS of class I (sensitive to glyphosate) or class II (insensitive to glyphosate). This basis for differences in sensitivity was confirmed using in vitro experiments in which the EPSPS gene from bee gut bacteria was cloned into Escherichia coli. All strains of the core bee gut species, Snodgrassella alvi, encode a sensitive class I EPSPS, and reduction in S. alvi levels was a consistent experimental result. However, some S. alvi strains appear to possess an alternative mechanism of glyphosate resistance. Thus, exposure of bees to glyphosate can perturb their beneficial gut microbiota, potentially affecting bee health and their effectiveness as pollinators.

Motta, E.V.S., Raymann, K. and Moran, N.A., 2018. Glyphosate perturbs the gut microbiota of honey bees. Proceedings of the National Academy of Sciences of the United States of America. Published ahead of print September 24, 2018. 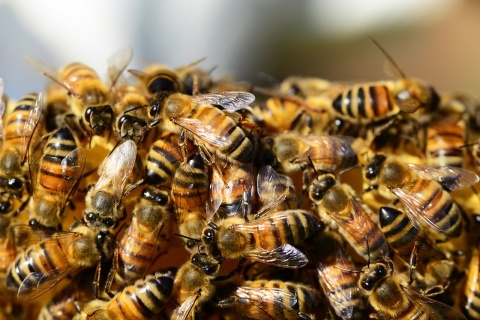