This report from food campaign group Feedback ranks ten UK supermarkets on their efforts to cut the negative impacts of the meat that they sell and encourage their customers to switch to “less and better” meat.

As shown below, Waitrose and Marks & Spencer came out top, having made changes in both stores and supply chains, such as Marks & Spencer having a target and performance indicator for increasing their range of plant-based products (albeit with no corresponding target to reduce their meat sales) and Waitrose having a policy on sustainable animal feed (i.e. zero deforestation by 2025).

Meanwhile, Iceland is ranked lowest, partly due to being the only UK supermarket not to sign the Cerrado Manifesto on reducing Amazon deforestation and partly because its fresh meat labelling does not go beyond the required regulatory minimum. Iceland has made some progress (according to this report) in that it has introduced a range of frozen vegan products.

The report notes that some supermarkets use so-called “fake farm” labels, where farm brand names are supposedly chosen to give the impression that the products are from small-scale British farms (e.g. the Tesco brand “Woodside Farms”), when in fact they may come from large, intensive farms that are not necessarily British. 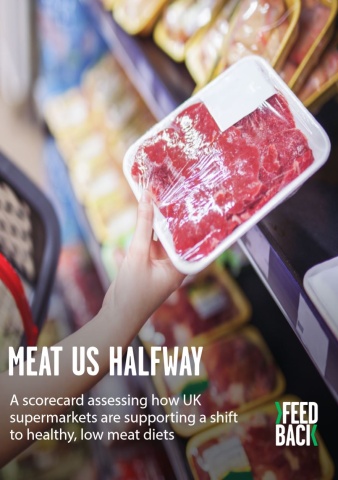