Two studies, one in Nature and the other in Science present evidence to demonstrate the importance of biodiversity in maintaining long term ecosystem productivity and sustainability.

The paper in Science presents data from two 14-year field experiments which looked at how the effect of diversity on plant productivity changed over the long-term. According to one of the paper’s authors "Prior shorter-term studies, most about two years long, found that diversity increased productivity, but that having more than six or eight species in a plot gave no additional benefit," Reich says. However this study finds that over a 14-year time span, all 16 species in the most diverse plots contributed more and more The study also found that different species have different ways of acquiring water, nutrients and carbo, and of maintaining them in an ecosystem.

Reference and abstract as follows:

Plant diversity generally promotes biomass production, but how the shape of the response curve changes with time remains unclear. This is a critical knowledge gap because the shape of this relationship indicates the extent to which loss of the first few species will influence biomass production. Using two long-term (≥13 years) biodiversity experiments, we show that the effects of diversity on biomass productivity increased and became less saturating over time. Our analyses suggest that effects of diversity-dependent ecosystem feedbacks and interspecific complementarity accumulate over time, causing high-diversity species combinations that appeared functionally redundant during early years to become more functionally unique through time. Consequently, simplification of diverse ecosystems will likely have greater negative impacts on ecosystem functioning than has been suggested by short-term experiments.

The paper in Nature bases its conclusions on a data synthesis which finds that species loss ranks among the major drivers of primary production and decomposition - key processes involved in the carbon cycle and the provisioning of many ecosystem services.  This effect appears to be as significant as other forms of environmental stress, such as climate change and pollution.

Reference and abstract as follows:

Evidence is mounting that extinctions are altering key processes important to the productivity and sustainability of Earth’s ecosystems. Further species loss will accelerate change in ecosystem processes, but it is unclear how these effects compare to the direct effects of other forms of environmental change that are both driving diversity loss and altering ecosystem function. Here we use a suite of meta-analyses of published data to show that the effects of species loss on productivity and decomposition - two processes important in all ecosystems - are of comparable magnitude to the effects of many other global environmental changes. In experiments, intermediate levels of species loss (21–40%) reduced plant production by 5–10%, comparable to previously documented effects of ultraviolet radiation and climate warming. Higher levels of extinction (41–60%) had effects rivalling those of ozone, acidification, elevated CO2 and nutrient pollution. At intermediate levels, species loss generally had equal or greater effects on decomposition than did elevated CO2 and nitrogen addition. The identity of species lost also had a large effect on changes in productivity and decomposition, generating a wide range of plausible outcomes for extinction. Despite the need for more studies on interactive effects of diversity loss and environmental changes, our analyses clearly show that the ecosystem consequences of local species loss are as quantitatively significant as the direct effects of several global change stressors that have mobilized major international concern and remediation efforts.

Coverage of the study’s findings can be found here. 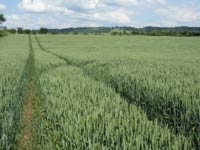