Around 15% of the carbon dioxide emissions from food consumption in the European Union are due to deforestation, according to this paper, which traces the links between final consumers and the expansion of agriculture (including both crops and pasture) and tree plantations into tropical forests. Depending on the model used, 29% to 39% of tropical deforestation emissions were attributed to the production of goods for export.

The paper finds that tropical deforestation for agriculture and tree plantations caused around 2.6 Gt CO2 of emissions per year between 2010 and 2014. For comparison, annual carbon dioxide emissions from fossil fuels and industry were approximately 34 Gt CO2 eq. per year between 2008 and 2017 (source). Image: Figure 1, Pendrill et al. Emissions sources for deforestation-related carbon dioxide emissions are diverse and vary by region. Emissions embodied in production are quantified for each commodity group within each country (here summarised by region). A region’s width on the x-axis corresponds to the embodied emissions produced in that region, while the y-axis shows the share of emission attributed to each commodity group within each region, implying that the rectangles within the plot are scaled according to the emissions embodied in each region-commodity combination. The percentages within the rectangles indicate the share of the total (2.6 GtCO2 yr−1) embodied emissions. For forestry products, the results show emissions associated with tree-plantation expansion, but not emissions due to clearing purely for timber without subsequent land-use expansion. Read the full paper here. See also the Foodsource resource How do food systems affect land-use and biodiversity? and the paper Deforestation displaced: trade in forest-risk commodities and the prospects for a global forest transition. 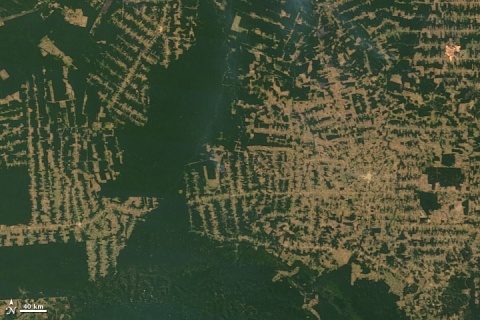