With global trade, UK consumption patterns are displacing cropland use to other countries. This paper by FCRN members Henri de Ruiter, Jennie Macdiarmid and Pete Smith looks at the environmental consequences of competition for global agricultural land and specifically at the total land footprint associated with the total livestock product supply in the UK.

The total land footprint per capita decreased from 1986 until 2011, particularly because of a decrease in the grassland footprint while cropland footprints for feed saw a slight increase, driven by rising demand for pigs and poultry. This lower UK land footprint associated with food is attributed to lower ruminant product supply, so lowering  grassland requirements, suggesting that a lower meat consumption globally could lower land use.

This paper notes that meeting increasing demand for food by expanding current agricultural areas will be very challenging and that shifts towards diets with lower consumption of animal products represent the best option to increase supply while limiting land use (increasing yields through intensification).

To obtain the total land footprint associated with UK food supply the authors look at cropland and grassland for feed and food, taking into account trends of intensification or extensification. They combine the cropland area required for feed crop production and the grazing areas required to produce ruminant products (such as milk and meat) and compare the land footprint of livestock supply with the total cropland footprint of crops directly consumed by humans. The analysis assumes that only ruminant products are dependent on grasslands and does not consider other products from livestock (such as wool & leather).

The paper does not analyse the GHG emissions implications (carbon storage and release) of land conversions within the agricultural sector, for instance the conversion of some grasslands into arable. This could potentially constitute an interesting future line of research.

Over the coming decades the global demand for food, and especially for animal products is projected to increase. At the same time, competition for agricultural land is projected to intensify due to a wide range of drivers, including a growing world population, changes in food consumption patterns and bioenergy production. It is therefore vital to understand the relationship between global agricultural land use and the consumption of food. Here we use the United Kingdom as an example to show the agricultural land footprint of a highly developed country over the period 1986–2011. Our analysis shows that the total land footprint of the UK has decreased over time from 25,939 kha in 1987 (3-year mean) to 23,723 kha in 2010 (3-year mean), due to a lower grassland footprint resulting from lower ruminant meat supply. Cropland use has increased slightly from around 8400 kha in 1987 to about 8800 kha in 2010, but has decreased slightly on a per-capita basis as the UK’s population increased over time. Our analysis shows that 85% of the UK’s total land footprint is associated with meat and dairy production, but only 48% of total protein and 32% of total calories derive from livestock products. Our results suggest that, if countries reduce their ruminant product consumption, land could be freed up for other uses, including bio-energy production, forest regrowth, and biodiversity conservation. 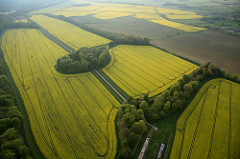