The state of food insecurity in the world 2015 - Meeting the 2015 international hunger targets: taking stock of uneven progress

In this publication FAO highlights the latest statistics on global food insecurity.

The decline is more pronounced in developing regions, despite significant population growth. In recent years, however, progress has been hindered by slower and less inclusive economic growth as well as political instability in some developing regions, such as Central Africa and western Asia.

Importantly, the report states that A total of 72 developing countries out of 129, or more than half the countries monitored, have reached the Millennium Development Goal (MDG) 1 hunger target. Most of these countries enjoyed stable political conditions and economic growth, often accompanied by social protection policies targeted at vulnerable population groups.  The report also notes that economic growth and social protection systems are key success factors for achieving the MDG 1 hunger and poverty targets. Economic growth needs to be inclusive and provide opportunities for improving the livelihoods of the poor. Enhancing the productivity and incomes of smallholder family farmers is key to progress. Natural and human-induced disasters or political instability are described as some of the most common things preventing countries from achieving the hunger and poverty goals. 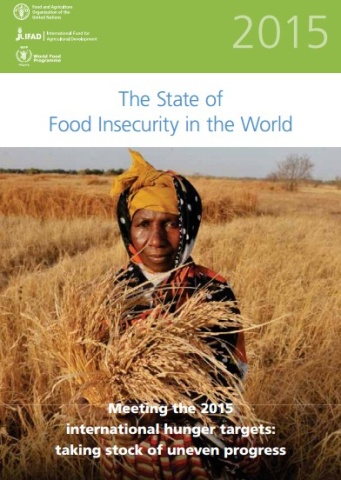