In contrast, Brazil has managed to significantly reduce food insecurity nationwide over the past two decades. Brazil took several measures to do this, including improving inter-sectoral co-ordination, identifying and implementing priorities and monitoring resource allocation using their National Food and Nutrition Security Council.

In Brazil, it has been shown that the inclusion of civil society stakeholders in the decision making and resource processes was beneficial towards FGS. However in the case of Mexico, it is clear that overcoming cross-sector fragmentation, where these sectors are dominated by private interest monopolies, is incredibly difficult. Overall the paper argues for substantial structural reform in the region, as simply acknowledging food security as a human right is not enough to make a difference.

In spite of major advances in recent decades, food insecurity continues to be a pressing concern to policymakers across the world. Food security governance (FSG) relates to the formal and informal rules and processes through which interests are articulated, and decisions relevant to food security in a country are made, implemented and enforced on behalf of members of society. Improving FSG is challenging given the many different governance levels, political arenas, and policy domains involved. Whereas food security governance (FSG) is considered central to advancing the human right to food globally and for the attainment of each of the 17 Sustainable Development Goals, relatively little is known about whether and how existing governance arrangements and practices contribute to achieving these objectives. Therefore, a first step for understanding how to improve FSG involves realizing a better understanding of how governance functions are performed in diverse settings. This special issue highlights FSG lessons from Brazil and Mexico, investigating the effects of civil society involvement and coordination with and within government, non-governmental organizations and the private sector. The experience in Latin America with experience-based food security scales strongly suggests that selecting food insecurity indicators that are useful to policy makers are key for improving FSG in the general population and vulnerable subgroups, including the elderly. Prospective measurement and policy mixed-methods research is needed to better document FSG and understand its optimal architecture in Latin America and beyond.

See also the various online discussions on related topics in our Latin American forum (in Spanish) and a summary of these discussions in English here. 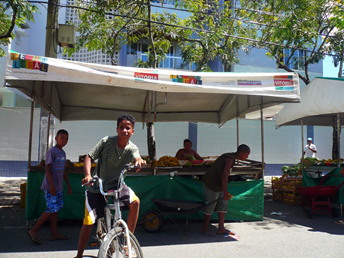