The area fully covered by solar panels also produced 126% more dry biomass than the alleys between panels, and 90% more biomass relative to the control area with no solar panels.

The paper concludes that farms could beneficially integrate solar panels into their management scheme, particularly in semi-arid pastures with wet winters. Successful integration of solar panels into productive agricultural land could reduce land use conflicts.

Power demands are set to increase by two-fold within the current century and a high fraction of that demand should be met by carbon free sources. Among the renewable energies, solar energy is among the fastest growing; therefore, a comprehensive and accurate design methodology for solar systems and how they interact with the local environment is vital. This paper addresses the environmental effects of solar panels on an unirrigated pasture that often experiences water stress. Changes to the microclimatology, soil moisture, water usage, and biomass productivity due to the presence of solar panels were quantified. The goal of this study was to show that the impacts of these factors should be considered in designing the solar farms to take advantage of potential net gains in agricultural and power production. Microclimatological stations were placed in the Rabbit Hills agrivoltaic solar arrays, located in Oregon State campus, two years after the solar array was installed. Soil moisture was quantified using neutron probe readings. Significant differences in mean air temperature, relative humidity, wind speed, wind direction, and soil moisture were observed. Areas under PV solar panels maintained higher soil moisture throughout the period of observation. A significant increase in late season biomass was also observed for areas under the PV panels (90% more biomass), and areas under PV panels were significantly more water efficient (328% more efficient). 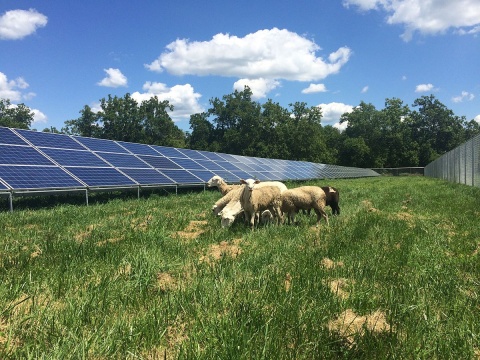