In this article, researchers from the UK and USA present their findings of a 2015 case study of Scottish salmon farming, their goal being to illuminate the economic and food security value that may be gained through improved management and use of aquaculture by-products.

The authors begin by defining and outlining the key concepts and premises of the paper: notably, that they are taking sustainability to mean “a process-driven journey of continual improvements that seeks to create more resource efficient products that maintain functional ecosystems”; that by-products of fish aquaculture include trimmings, skins, heads, frames (bones with attached flesh), viscera (guts) and blood; and that marine by-products are not ‘waste’ but rather contain many valuable minerals, vitamins, proteins and lipids, which have a large potential range of food and non-food applications.

In section 2, the authors provide some historical and numerical context to the most commonly used measure of fish production efficiency: the Fish In: Fish Out (FI:FO) ratio. This ratio applies to farmed fish and is a measure of how much fishmeal (i.e. feed for farmed fish derived from other fish) is used per amount of fish produced. There are multiple ways of calculating this ratio, which the authors describe briefly. Between 1995 and 2006 mean FI:FO ratios decreased as a result of lower inclusion of fishmeal and fish oil in aquacultural feeds, and improved feed conversion ratios in the farmed fish; additionally, more of the fishmeal and oil being used in feed is being derived from by-products of aquaculture itself, rather than wild-catch. Thus, improvements in efficiency and sustainability have already been made. However, FI:FO ratio calculations that are currently used end at the farm ‘gate’: i.e. they only consider the efficiency of the production stage and do not consider the resource use efficiency of the subsequent processing, and in particular the use of by-products. The authors suggest that a robust evaluation of resource use would include, on top of the FI:FO concept, an examination of the value chain beyond the ‘Fish Out’ stage. Section 3 of the paper therefore presents a case study of just such an analysis as applied to the Scottish salmon industry.

The Scottish case study was carried out in 2016, using a mixed methods approach - i.e. a combination of quantitative methods, e.g. nutritional analysis of by-products, and qualitative methods, such as a literature review and interviews with key informants and people involved in the processing of farmed fish. The goal was to identify the types of by-product created from processing of farmed fish, and how they are currently used. The Scottish salmon industry was chosen due to its high status within aquaculture (it is the UK’s biggest food export and highly competitive with the two biggest salmon producers, Norway and Chile, on nutritional and animal welfare grounds. The key findings of the case study were:

Based on the findings of the case study, in section 4 the authors present two “scenarios”: one in which by-products are used strategically to maximise financial value, and one in which they are used strategically to maximise food output. The conclusions drawn by running these two scenarios are that strategic by-product utilisation could result in a potential by-product monetary value increase of 803%, and a potential food output increase of 61%.

By amalgamating the findings of sections 3 and 4, the authors create the Food Recovery Hierarchy for Fish By-Products (Fig. 2) as a modification of Fig. 1, to describe the best way to extract monetary and food value from by-products, which aligns with the the most preferred way to utilise them from an environmental stand-point. The article concludes that this hierarchy could be used to inform certification of aquaculture facilities, as part of a concerted endeavour by all stakeholders to maximise the economic, environmental and food security benefits of aquaculture by-products.

Since 2000, the use of wild fish inputs in the production of farm raised fish outputs, also known as the Fish In: Fish Out (FI:FO) ratio, has been a primary concern of the sustainability dialogue surrounding aquaculture production. Far less attention has been placed on the sustainability of downstream processing, including how by-products are managed. This paper contributes new information on the current utilisation of aquaculture by-products in a case study on the Scottish Atlantic salmon industry. The findings show that there is considerable potential to increase the sustainability of the industry through maximising human edible yield by strategically managing by-products. Supporting the movement towards the full utilisation of by-products, this paper goes a step further by emphasising the need to maximise their use in human consumption and select animal feeds, highlighting the economic, food security, and environmental benefits of doing so. Through exploratory scenarios based on the case study, the paper identifies that Scotland could increase food production from fish farming by over 60%, increase by-product revenue by 803%, and increase the industry bottom-line by over 5%, all without having to put any new cages in the water, or use any more marine resources. As the aquaculture industry moves into a new era of production and processing, where a diverse range of products can be produced from a single species, sustainability will be sought throughout the value chain. It is hoped that the ideas raised within this paper will encourage further discussion and collaboration on this topic going forward.

See also the FCRN report ‘Lean, green, mean, obscene…? What is efficiency? And is it sustainable?’ on environmental efficiency in the livestock sector, including in aquaculture. 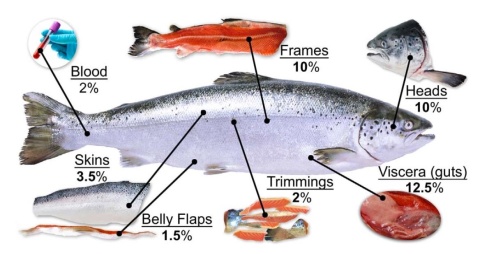