Pesticides could be much more toxic than previously thought, thanks to adjuvants

This article examines the toxicity of ‘adjuvants’ in pesticides. Commercial pesticide formulations contain the active ingredient and various other chemicals - adjuvants - such as surfactants, antifoaming agents, preservatives, solvents and dyes. Adjuvants are generally neglected by health risk assessments of pesticides in the United States and the European Union. This paper uses the examples of glyphosate and neonicotinoids to illustrate that adjuvants can result in pesticides being significantly more toxic than the active ingredient alone. The paper calls for changes in regulation.

750 different glyphosate-based herbicide formulations are available worldwide, with each having a different mixture of active ingredient and adjuvants. It is not always stated in studies which formulation has been used, causing confusion in the scientific community and difficulty in replicating studies. Studies have shown that some commercial formulations of glyphosate-based herbicides are 1000 times more toxic than glyphosate alone. The toxicity of formulations has been found to be proportional to the concentration of polyethoxylated tallow amine (POEA) surfactants. The formulations without ethoxylated surfactants were around 100 times less toxic to human cells (in the form of tissue cultures). This paper cites several other studies showing that commercial formulations have greater or different toxicity effects compared to glyphosate alone. While the European Commission has now introduced regulations on POEA-type adjuvants in glyphosate herbicides, POEA can still be used in other types of herbicides. The result is that farmers might not know the exact toxicity of the brand they buy.

Neonicotinoid insecticides have been associated with negative effects on non-target organisms, as shown in the case of colony collapse disorders in bees. Organosilicon surfactants are a common adjuvant used with neonicotinoids. They are silicon-based polymers, which modify the surface tension of plant cells and insect cuticles and increase the penetration of the active ingredient. Organosilicon surfactants have been found in beeswax and pollen samples and it has been suggested that they could be a missing part of the puzzle behind the cause of bee colony collapse disorder. Another adjuvant used in neonicotinoid formulations, N-methyl-2-pyrrolidone, has been found to adversely affect honey bee reproduction and development.

Adjuvants in commercial formulations are often not disclosed on the grounds of commercial confidentiality. They are generally ignored when regulatory agencies calculate acceptable daily intake (ADI) levels, which are levels of exposure of pesticides to humans deemed safe on health grounds. ADIs are generally calculated from animal experiments. A safety factor 10 is then used when extrapolating from animals to humans, and another factor of 10 to account for variation in sensitivity between people. However, these safety factors may not be large enough to account for the toxicity of adjuvants.

The paper makes the following recommendations:

Commercial formulations of pesticides are invariably not single ingredients. Instead they are cocktails of chemicals, composed of a designated pesticidal “active principle” and “other ingredients,” with the latter collectively also known as “adjuvants.” These include surfactants, antifoaming agents, dyes, etc. Some adjuvants are added to influence the absorption and stability of the active principle and thus promote its pesticidal action. Currently, the health risk assessment of pesticides in the European Union and in the United States focuses almost exclusively on the stated active principle. Nonetheless, adjuvants can also be toxic in their own right with numerous negative health effects having been reported in humans and on the environment. Despite the known toxicity of adjuvants, they are regulated differently from active principles, with their toxic effects being generally ignored. Adjuvants are not subject to an acceptable daily intake, and they are not included in the health risk assessment of dietary exposures to pesticide residues. Here, we illustrate this gap in risk assessment by reference to glyphosate, the most used pesticide active ingredient. We also investigate the case of neonicotinoid insecticides, which are strongly suspected to be involved in bee and bumblebee colony collapse disorder. Authors of studies sometimes use the name of the active principle (for example glyphosate) when they are testing a commercial formulation containing multiple (active principle plus adjuvant) ingredients. This results in confusion in the scientific literature and within regulatory circles and leads to a misrepresentation of the safety profile of commercial pesticides. Urgent action is needed to lift the veil on the presence of adjuvants in food and human bodily fluids, as well as in the environment (such as in air, water, and soil) and to characterize their toxicological properties. This must be accompanied by regulatory precautionary measures to protect the environment and general human population from some toxic adjuvants that are currently missing from risk assessments. 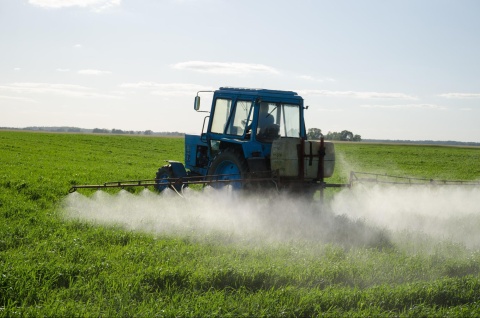