In this paper, researchers from universities in Switzerland, Italy, Austria, the UK and Germany investigate the potential for feeding livestock on less food-competitive feedstuffs (FCF – that is, animal feed derived from fewer human edible food sources) to reduce the negative environmental impacts of livestock farming.

The authors begin by describing the various approaches that have been proposed for improving livestock sustainability:

(NOTE: the FCRN has written extensively on different framings and stakeholder approaches to improving livestock sustainability.  See in particular Gut Feelings , which in somewhat science-fiction mode describes four different livestock scenarios) and Lean, green, mean, obscene, which looks at how different interpretations of the word efficiency influence ideas about what a sustainable livestock system looks like;  as well as these journal articles http://www.fcrn.org.uk/fcrn/publications/three-perspectives-sustainable-food-security and http://www.fcrn.org.uk/fcrn/publications/food-sustainability-problems-perspectives-and-solutions).

The focus of the study here is on the third strategy, which they term the ‘consistency’ strategy. This approach seeks to avoid feeding livestock on grains and crops that could be eaten directly by humans.  Instead, livestock are to be raised on the following feed sources:

The researchers model the effects of such a strategy on patterns of crop and livestock production and human diet, and on key environmental indicators, including land and water use, greenhouse gas emissions, fertiliser use and pesticide surpluses.

They acknowledge that their model does not include or account for market effects, and that it should not therefore be treated as a forecasting tool.  Note that – unlike the recent article in Nature Climate Change by de Silva et al – the model does not incorporate the possibility of improvements in grassland productivity that in turn would increase livestock productivity and would lead to soil carbon sequestration, thereby offsetting direct emissions in the form of methane and nitrous oxide.

The researchers construct a range of ‘food – not feed’ scenarios for 2050 which differ in the extent to which they adhere completely to the food not feed principle (from 0% to 100%). They then  compare these against a reference scenario based on the FAO’s agricultural projections.

They find that compared with the base year (i.e. the situation today) zero use of food competing foodstuffs would result in:

If energy levels in the human diet are kept constant, the share of energy delivered through protein would change from today’s 10.8% to 10.3% - which (although the authors do not discuss this) is at the very lowest end of human protein recommendations (see for example here).  The share of livestock products in the total protein supply would drop from 38% to 11%

Increasing efficiency in livestock production and reducing the share of animal products in human consumption are two strategies to curb the adverse environmental impacts of the livestock sector. Here, we explore the room for sustainable livestock production by modelling the impacts and constraints of a third strategy in which livestock feed components that compete with direct human food crop production are reduced. Thus, in the outmost scenario, animals are fed only from grassland and by-products from food production. We show that this strategy could provide sufficient food (equal amounts of human-digestible energy and a similar protein/calorie ratio as in the reference scenario for 2050) and reduce environmental impacts compared with the reference scenario (in the most extreme case of zero human-edible concentrate feed: greenhouse gas emissions -18%; arable land occupation -26%, N-surplus -46%; P-surplus -40%; non-renewable energy use -36%, pesticide use intensity -22%, freshwater use -21%, soil erosion potential -12%). These results occur despite the fact that environmental efficiency of livestock production is reduced compared with the reference scenario, which is the consequence of the grassland-based feed for ruminants and the less optimal feeding rations based on by-products for non-ruminants. This apparent contradiction results from considerable reductions of animal products in human diets (protein intake per capita from livestock products reduced by 71%). We show that such a strategy focusing on feed components which do not compete with direct human food consumption offers a viable complement to strategies focusing on increased efficiency in production or reduced shares of animal products in consumption.

You can find related resources in the Research Library categories on primary production: agriculture, animal issues, meat, as well as the keywords categories on animal feed, sustainable healthy diets, consumption and production trends, grazing and land use.

See also our summary of another recent paper, Call for conservation: abandoned pasture, as well as our summary of the paper by De Oliviera Silva et al. For another paper discussing similar questions, see Elin Röös’ paper  which she recently blogged about on the FCRN website. 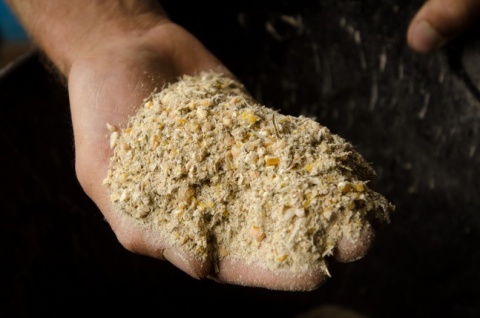