This paper highlights the impacts of heat stress on yields of maize in France.  It finds that while irrigation can be used to adapt to reduced rainfall, heat stress is a concern that cannot be so easily managed.  It finds that assuming current climate projections, yields per hectare will need to improve by 12% between 2016 and 2035 simply to maintain current production levels.

This puts the concept of sustainable intensification in a new light – the achievable challenge in some regions may be not so much to increase output in absolute terms but just to offset the climate-induced changes in productivity.

Improved crop yield forecasts could enable more effective adaptation to climate variability and change. Here, we explore how to combine historical observations of crop yields and weather with climate model simulations to produce crop yield projections for decision relevant timescales. Firstly, the effects on historical crop yields of improved technology, precipitation and daily maximum temperatures are modelled empirically, accounting for a nonlinear technology trend and interactions between temperature and precipitation, and applied specifically for a case study of maize in France. The relative importance of precipitation variability for maize yields in France has decreased significantly since the 1960s, likely due to increased irrigation. In addition, heat stress is found to be as important for yield as precipitation since around 2000. A significant reduction in maize yield is found for each day with a maximum temperature above 32 °C, in broad agreement with previous estimates. The recent increase in such hot days has likely contributed to the observed yield stagnation. Furthermore, a general method for producing near-term crop yield projections, based on climate model simulations, is developed and utilized. We use projections of future daily maximum temperatures to assess the likely change in yields due to variations in climate. Importantly, we calibrate the climate model projections using observed data to ensure both reliable temperature mean and daily variability characteristics, and demonstrate that these methods work using retrospective predictions. We conclude that, to offset the projected increased daily maximum temperatures over France, improved technology will need to increase base level yields by 12% to be confident about maintaining current levels of yield for the period 2016–2035; the current rate of yield technology increase is not sufficient to meet this target. 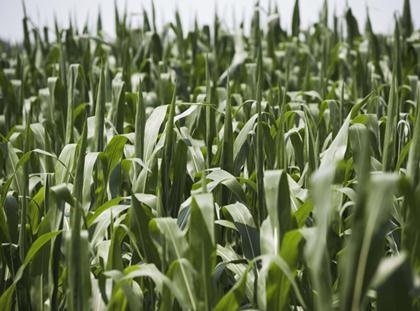