Overcoming barriers to the adoption of climate-friendly practices in agriculture

This OECD Food, Agriculture and Fisheries report employs a meta-analysis/literature review approach to identify and analyse barriers to the adoption of “climate-friendly” policies in agriculture; that is, the adoption of measures to enhance the adaptation of farming to the impacts of climate change, and the mitigation of its contributions to greenhouse gas (GHG) emissions. It should be noted that the report does not go into specifics about what constitutes a climate-friendly practice: this is taken to be an understood concept and the focus of the report is on the barriers to adoption of these measures, not the measures themselves.

The report begins by outlining the importance of adopting climate-friendly measures (namely that agriculture is simultaneously one of the biggest contributors to GHG emissions, and one of the sectors that is being/will be most strongly affected by climate change). It goes on to explain the differences in the drivers behind adoption of policies for adaptation to climate change vs. its mitigation (primarily that the former is usually of more obvious benefit to farmers than the latter, which tends to be designed more for the reduction of negative externalities rather than to increase production, etc., on-farm).

Section 3 focuses on identifying and categorising the barriers to the adoption of climate-friendly agricultural practices, and identifying the underlying causes of these barriers. The authors broadly classify barriers into those that originate at the farm level (e.g. a lack of necessary infrastructure, a lack of long-term security of ownership/tenure or heritage of the land, or the perceived or real economic costs of adopting new technologies or practices) and those which originate at the sector or policy level (e.g. actual and perceived effects of climate-friendly farming on production at a national level, insufficient education and awareness about the drivers and effects of climate change, the absence of clear and coherent climate policy for agriculture at an international level). A useful summary of the main barriers identified, their relative importance and suggested policy interventions can be viewed on page 11 of the report.

In section 4, the authors discuss the possible approaches that can be taken to overcome the identified barriers, and classify these approaches into one of two types: 1) changing policy that impedes the objectives of climate-friendly agriculture, and 2) introducing targeted initiatives (which can be further classified into “soft” approaches, such as on-farm demonstrations, and “hard” approaches, such as the installation of irrigation systems) to overcome the key barriers identified at local and regional levels.

The report recognises that the most important barriers vary by country, as does the most appropriate action to be taken. This particularly depends on the proportion of a country’s GHG emissions that is accounted for by agriculture: the authors recommend that in countries in which agriculture makes a large contribution to GHG emissions, the emphasis needs to be placed on large-scale system change and the implementation of educational programmes to overhaul entrenched behaviours; while in countries where agriculture makes a smaller contribution to GHG emissions, the emphasis should be on achieving emissions reductions through incremental changes, mediated by removing existing policy and behavioural barriers.

Considerable efforts have been devoted to understanding and developing technologies and practices that can help the agricultural sector reduce its greenhouse gas emissions and adapt to the impacts of climate change. The uptake of these “climate-friendly” technologies and practices, however, remains low. This report, based on a comprehensive review of the literature, analyses barriers that may prevent farmers from adopting climate-friendly practices. A multitude of potential barriers exist, some associated with farm-level constraints, others operating at the sector level, or created by existing policies. A series of recommendations are made to properly identify these types of barriers and to select the right instruments that would work to implement effective policy solutions.

Wreford, A., Ignaciuk, A. and Gruère, G. (2017). Overcoming barriers to the adoption of climate-friendly practices in agriculture. OECD Food, Agriculture and Fisheries Papers, No. 101, OECD Publishing, Paris 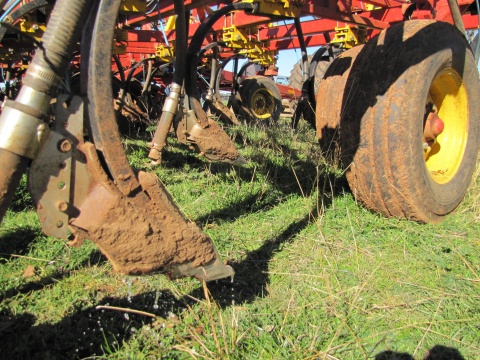