According to the latest joint OECD-FAO report Food Outlook which analyses global food markets, the coming decade will likely see an end to a period of high agricultural prices, although prices are expected to rise for livestock relative to those for crops.

The Outlook argues that as incomes increase, especially in emerging economies, demand for meat, fish and poultry will grow This will generate additional demand for feed, particularly for coarse grains and protein meals, causing their prices to rise prices relative to that of food staples such as wheat and rice.

The report notes that as food demand is expected to rise strongly in the coming decade, production gains alone will not suffice to eradicate hunger. Looking at more affluent populations, increased demand for food and feed is projected to be mostly met through productivity gains. Yield improvements are expected to account for about 80 percent of the increase in crop output. But for Sub-Saharan Africa which is a special focus for this years’ Outlook, only focusing on increasing production in a ‘business-as-usual’ scenario, would not be enough. It would reduce the rate of undernourishment to an estimated 23 to 19 percent in the region, but because of rapid population growth, Sub-Saharan Africa would still account for a rising share of the world's population suffering from hunger. They thus conclude that without decisive steps to move away from business-as-usual, hunger will not be eradicated by 2030 - the global target recently adopted by the international community.

According to the report’s baseline analysis, under a "business as usual" scenario -- in which agricultural productivity grows at the current trend rate and no major action is taken to reduce hunger -- projected growth in food availability would result in a reduction in the number of undernourished people globally from around 800 million now to under 650 million in 2025.

On meat, the report concludes:

“Overall world meat production is predicted to stagnate at about 321 million tonnes in 2016. Poultry is forecast to register some growth, followed by bovine and ovine meat, while pigmeat output could decline. Global meat trade is expected to recover, growing by 2.8 percent to 30.6 million tonnes.”

Read the full Food Outlook report here. Further details about the Outlook can be found at www.agri-outlook.org and you can read an article from FAO about the publication here. 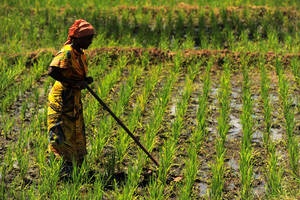