Nothing sweet about it: How sugar fuels land grabs

This Oxfam report highlights the risks of land grabs or conflicts over land that could be taking place within the supply chains of some of the largest food and beverage companies. Oxfam argues that poor communities across the globe are in dispute or even being kicked off their land, without consultation or compensation, to make way for huge sugar plantations.

Oxfam defines “large-scale as “an acquisition of any tract of land larger than 200 hectares, or twice the median land-holding of the country in question. The figure of 200 hectares comes from International Land Coalition ILC’s definition of ‘large-scale’.” The report argues that, since 2000, there have been 100 recorded large-scale land deals for sugar production occupying at least 4 million hectares of land.

Oxfam argues that large-scale land acquisitions become land grabs when they do one or more of the following:

Oxfam warns that the three agricultural commodities which pose the greatest risk of being linked to land grabs are: sugar, soy, and palm oil. Of the three, sugar uses the most land for food production. They argue that due to the long, often invisible, supply chains of companies such as Coca-Cola, PepsiCo, and Associated British Foods - ABF (three of the world’s largest food and beverage corporations) they can potentially find themselves fueling land conflicts or land-grabs and therefore need to strengthen their requirements for how suppliers address land rights to avoid conflicts. The large companies should, according to Oxfam, focus on disclosing where and from whom they source sugar, palm oil, and soy commodities, and uncover and disclose risks to and impacts on communities from land issues through credible and relevant impact assessments, with the full participation of affected communities. They should additionally adopt a credible ‘zero tolerance’ policy on land grabbing and include this in supplier codes of conduct, including for franchisees. They also should commit to sector-specific production sustainability standards in sugar, palm oil, and soy.  Lastly Oxfam asks the companies to urge governments and traders to tackle land grabbing and support responsible agricultural investments.

This report is based on Oxfam investigations in Brazil and Cambodia; in the report Oxfam takes the example of Coca-Cola trading with sugar cane agribusiness companies in Brazil. It is argued that Coca-Cola purchases sugar from the agribusiness company Bunge. Bunge in turn buys sugar cane from five farms located inside the Indigenous land of the state of Mato Grosso do Sul, where indigenous people are waiting for the government to complete a demarcation process to finally get their full legal right to the land. Oxfam recognizes that many companies buying the land often have no way to properly identify the rights of communities living on the land and that in doing so, they often offer financial compensation that is much lower than the market value, if they offer it at all. However, according to Coca-cola, the sugar does not come from the specific conflict area to which Oxfam refers.

Oxfam calls upon the companies to increase transparency and tighten their supply chains so that the ingredients they use in their products are not grown on land that has been grabbed from communities that depend on it for their survival.

The food industry has responded to Oxfam’s accusations and in a statement ABF assures that the company, including its African subsidiary lllovo is, and always has been ‘hugely sensitive to issues of land ownership’. ABF also says that any proposed expansion of its operations involves creating partnerships and negotiations with local communities, and sights its work in Mozambique as a prime example. They also describe how the issues are dealt with by citing examples from Illovo’s work in South Africa arguing that Illovo there has distributed more company-owned cane land to black farmers than any other sugar company in that country and did so voluntarily.

In a separate report, Oxfam has also accused Cargill of using a method of fragmented purchases to evade Colombian land acquisition laws. According to Oxfam, Cargill has within two years acquired over 124 000 acres of land in one region in Colombia through 36 shell companies. The company has therefore in effect bought over 30 times the maximum size of permitted land acquisitions by one single owner. Cargill responded to these allegations by saying that  “All of the actions of Cargill subsidiary Black River Asset Management were aboveboard and fully within the laws of Colombia.”They also stated that the reason Oxfam was able to find its information so easily because transactions were "public and above board". Finally they emphasize that this is a standard process in real estate industry: “This kind of structure is a standard way of doing business in the real estate industry around the world, because it provides the flexibility to sell off smaller parcels at a later date."

To read more, see the Oxfam Media Brief on land and sugar, click here. You can also read Oxfam’s blog about the new report here. For comments on the report by ABF, PepsiCo and Coca-cola, see here. The report on Cargill’s activities in Colombia can be found here. Cargill’s response and their recently opened Q & A about the Oxfam report allegations can be found here.

Oxfam has also published a research paper called Sugar Rush that analyses the issues in more detail.  If you would like a copy, contact Lucy Brinicombe at Oxfam.

Oxfam's Behind the Brands campaign aims to provide people who buy and enjoy these products with the information they need to hold the Big 10 food and drink brands - Associated British Foods (ABF), Coca Cola, Danone, General Mills, Kellogg's, Mars, Mondelez, Nestle, PepsiCo and Unilever - to account for what happens in the supply chains. The Behind the Brands Company Scorecard, which includes scores for company policies on land, you can view coverage of it here.

We would be keen to hear your views on the role of major companies in developing countries – in particular to what extent do companies’ activities constitute  ‘responsible investment in agriculture’ as opposed to ‘land grabbing?’  We’d be especially interested in comments from network members who are based in developing countries.  You can either comment in the comments box below this article or start a discussion on the Forums. You will need to be logged in to post, using your user name and password.  If you have forgotten what these are, just contact John Jackson and he will sort you out. 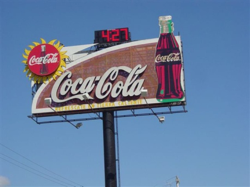