Nitrogen on the Table

This report quantifies the losses of reactive nitrogen from EU agriculture and food systems by food type, and assesses the impact of alternative diets (especially reduced meat) on the environment (through nitrogen emissions, greenhouse gas emissions and land use) and human health. Reactive nitrogen losses associated with agriculture refer mainly to the release of ammonia and nitrous oxide into the air, and nitrates into the ground. Nitrous oxide is a powerful greenhouse gas, and nitrate excesses in soil can lead to water pollution.

The key findings of the report were:

The structure of the report is as follows:

Chapter 2 focuses on current nitrogen emissions from agriculture and addresses the following questions:

Chapter 3 explores the historic and current composition of European diets, with a focus on animal protein and assesses current diets in the light of dietary recommendations.

Chapters 4 and 5 explore the consequences of a hypothetical shift in European diets, by assessing diets with a 25 to 50% lower consumption of animal products. By using biophysical models and methods, the effects on nitrogen emissions, greenhouse gas emissions as well as land use are evaluated. Chapter 4 focuses on the dietary aspects; Chapter 5 on the environmental outcomes.

Finally, Chapter 6 places the results of Chapters 2 to 5 in a broader context, discussing the potential economic consequences and the question of how these dietary shifts could be brought about. 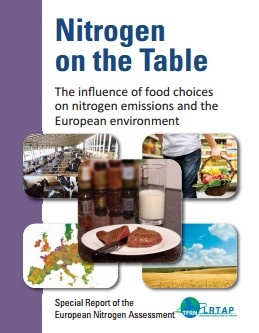